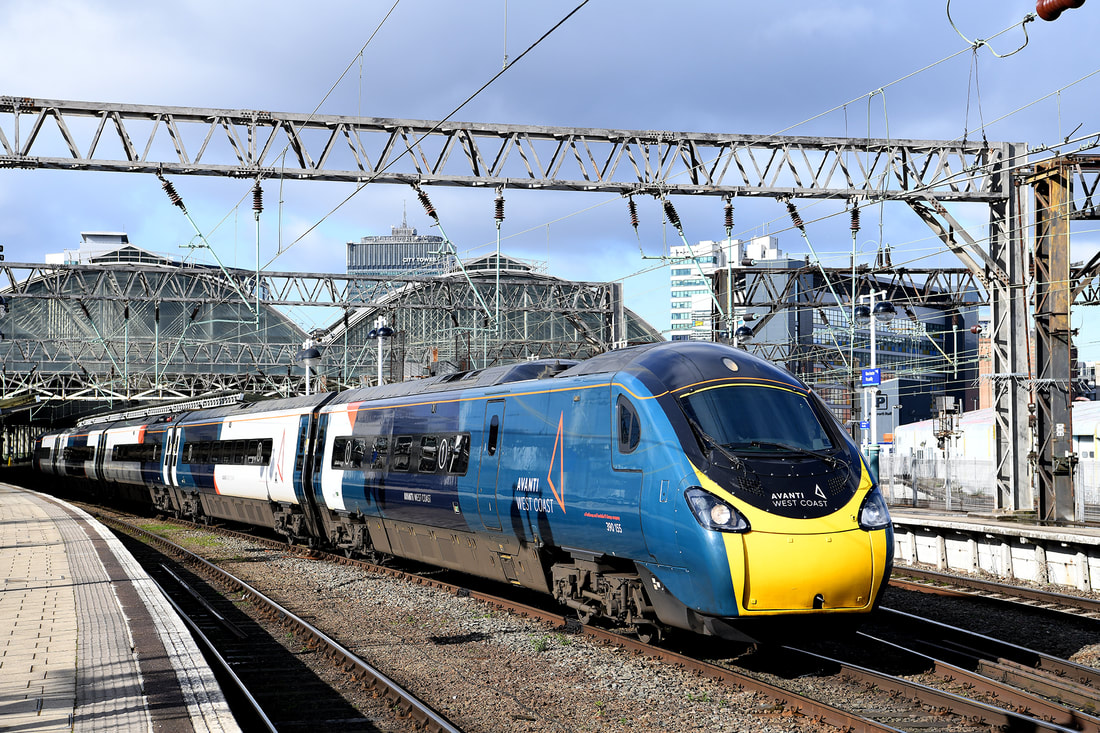 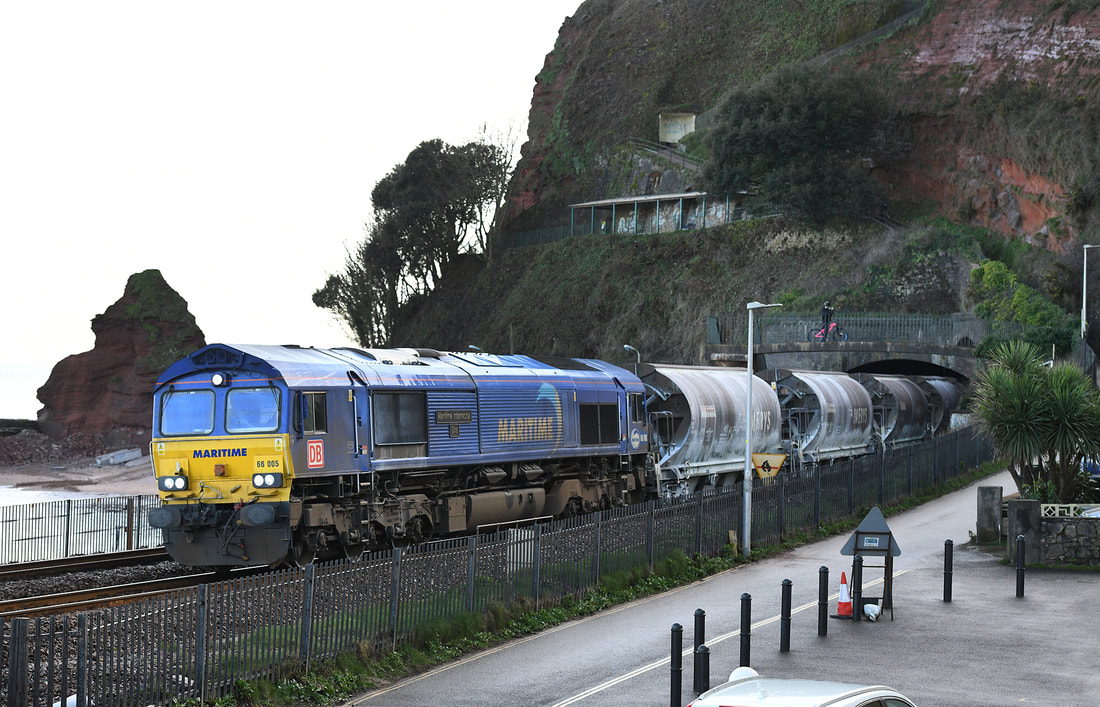 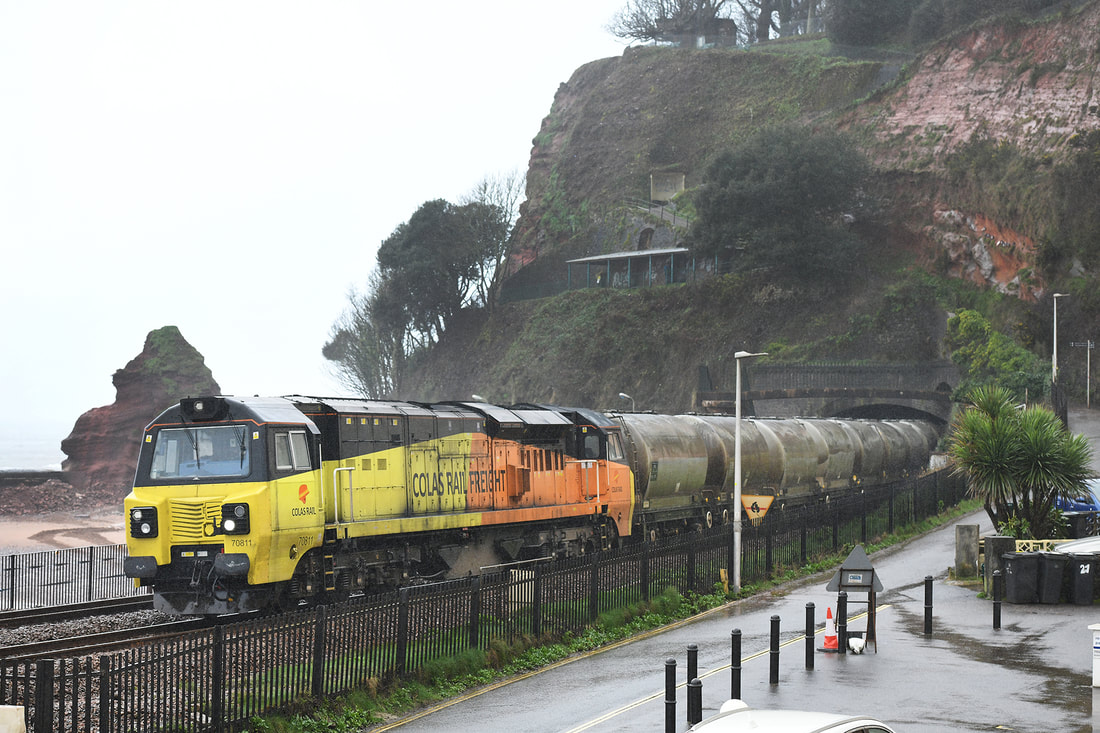 In grim conditions of mist and rain, one of the more rare Colas Class 70s in the west No. 70811 emerges from Kennaway Tunnel, Dawlish on 20 February 2020 powering 6C36, 06.25 Moorswater to Aberthaw empty cement 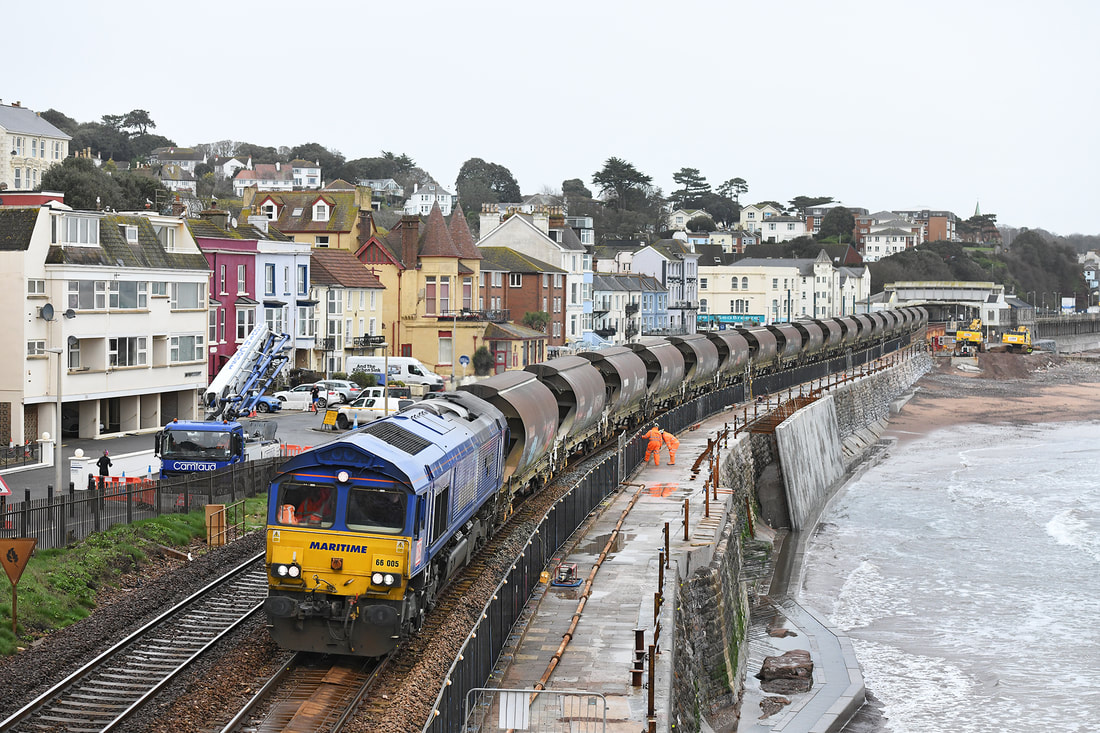 Bit of a rare visitor to Dawlish on the morning of 19 February 2020. DB-Maritime blue liveried Class 66 No. 66005 heads west as the 08.44 Exeter Riverside to St Blazey, which was in fact a restarted 6V99 18.19 (Tue) Bescot to St Blazey empty china clay service. Pity it was so dull. On the left is a huge Camfaud South Coast cement pumping truck which is used to pump cement below the tracks to the sea wall worksite, which on this day was filling a trench in the wall to secure steel brackets which in turn will support the new wall panels. 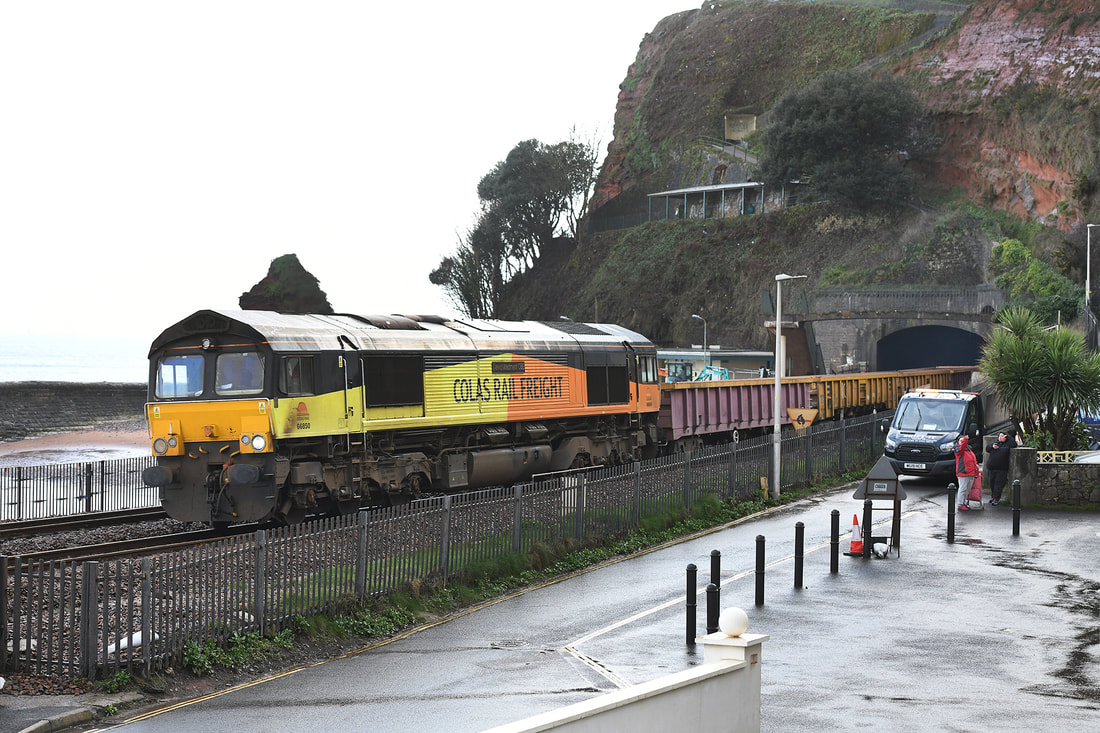 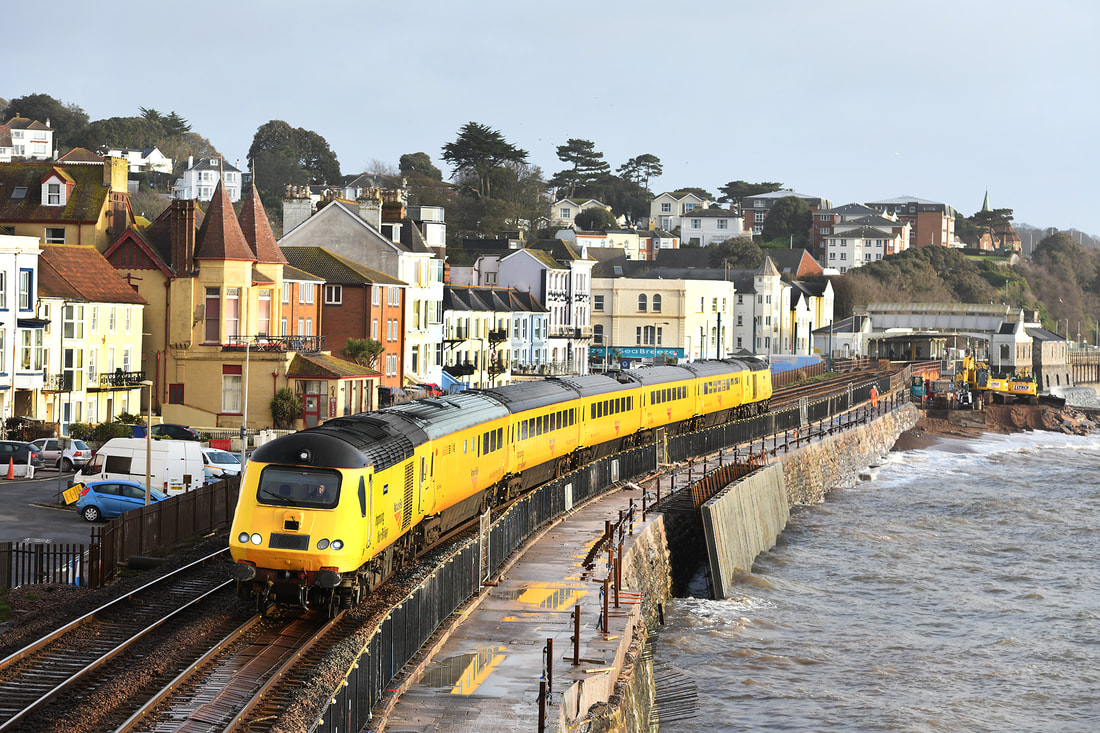 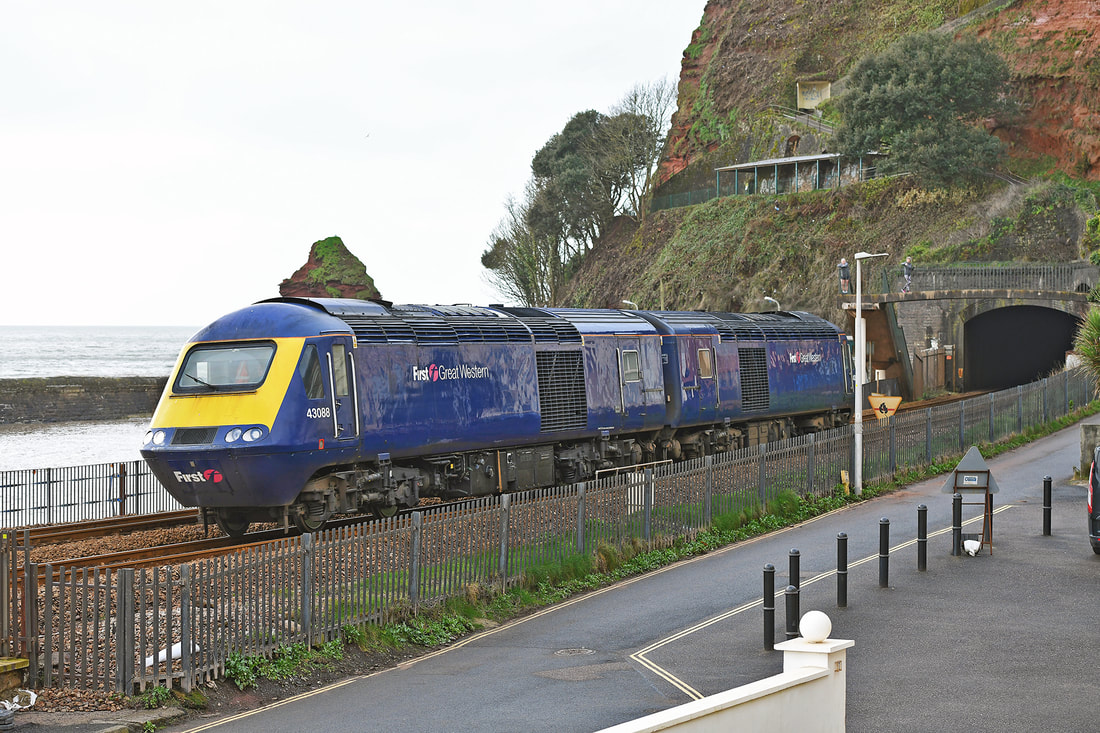 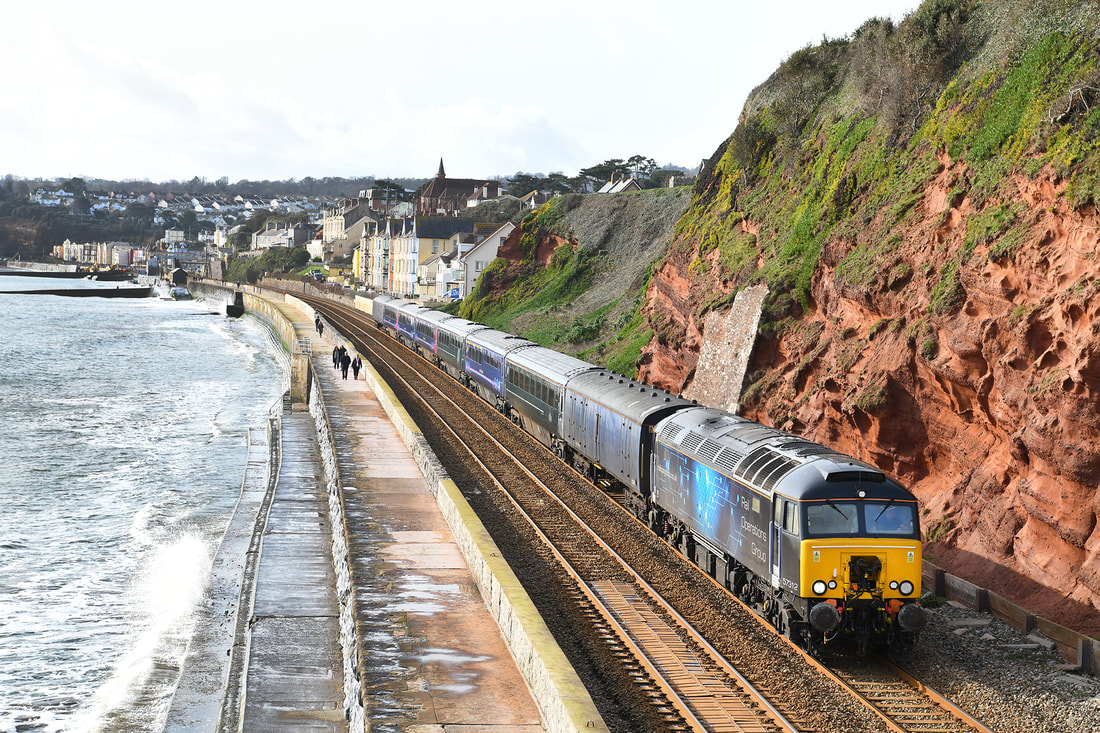 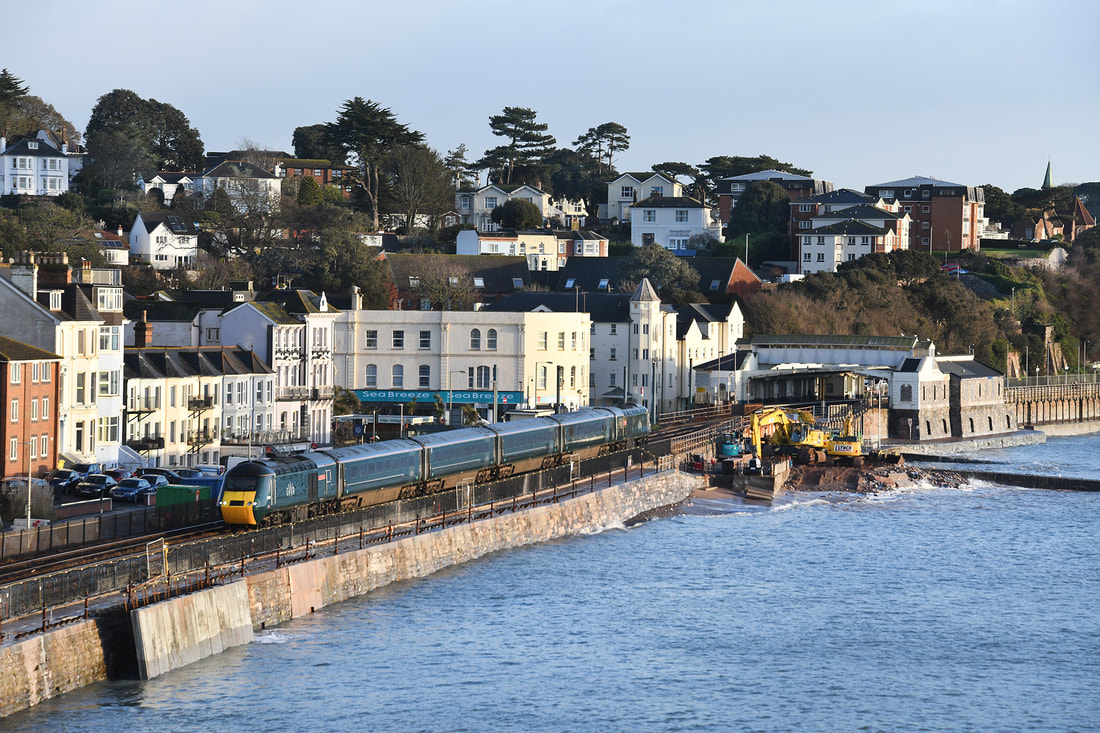 The first wall sections for the new Dawlish Sea Wall were erected on 9 February 2020, with several vertical panels erected each working shift after that day, dependant on tide conditions. This was the position on the morning of 12 February after an overnight work session. The erection has commenced in a central position and is now being worked either way. GWR 2+4 set No. GW08 with power cars 43198 leading and 43042 on the rear heads west with train 2C07, 06.44 Bristol Temple Meads - Penzance. 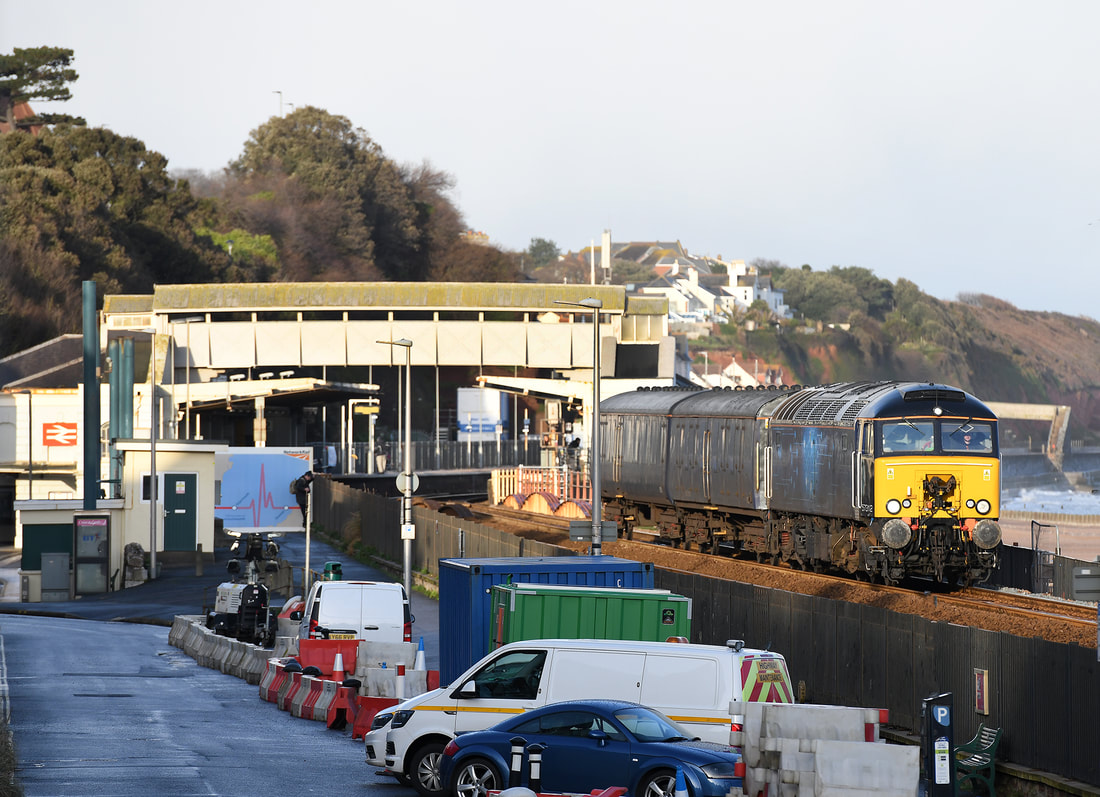 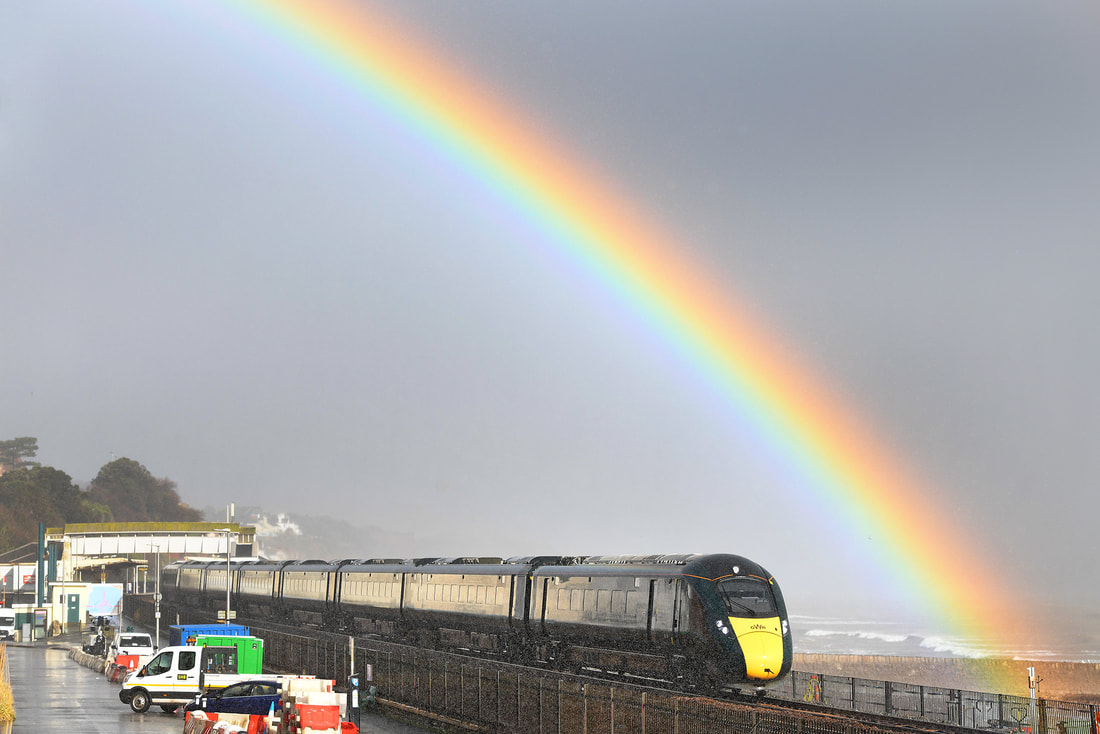 'Under the Rainbow' Now we know where the golden pot of money is hidden on the Dawlish Sea Wall!. 802114 heads west on 10 February with the late running 1C75, 09.35 Paddington to Paignton. This was a bit of a rush job and did the best I could. 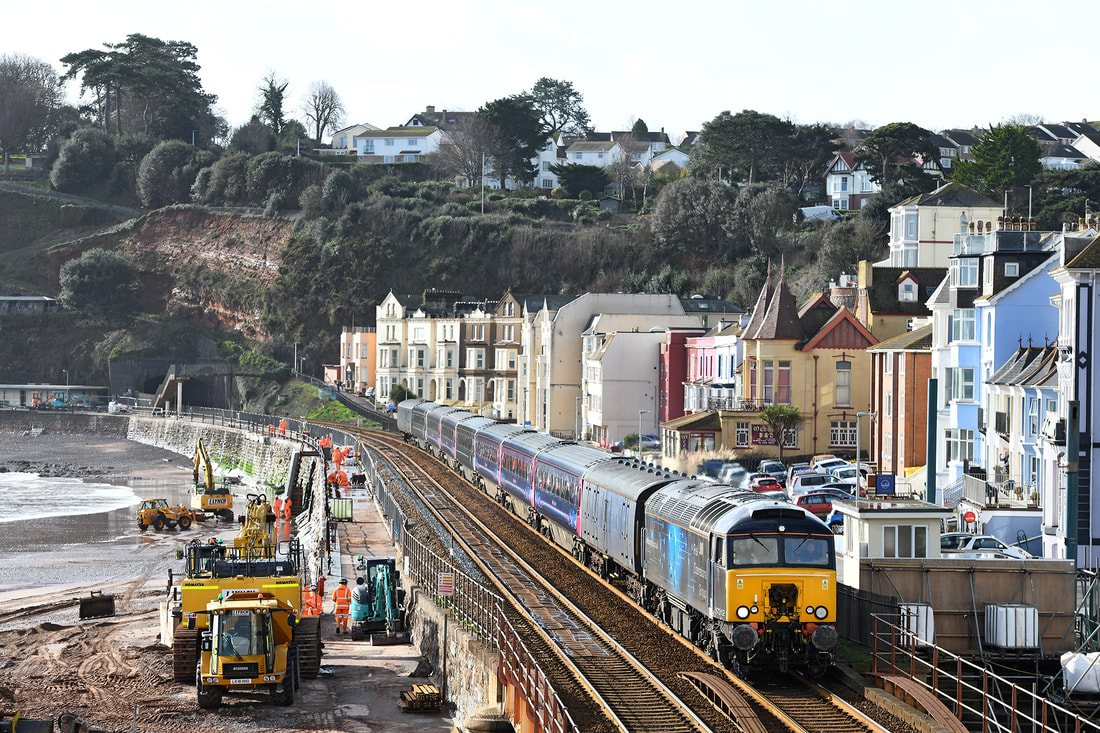 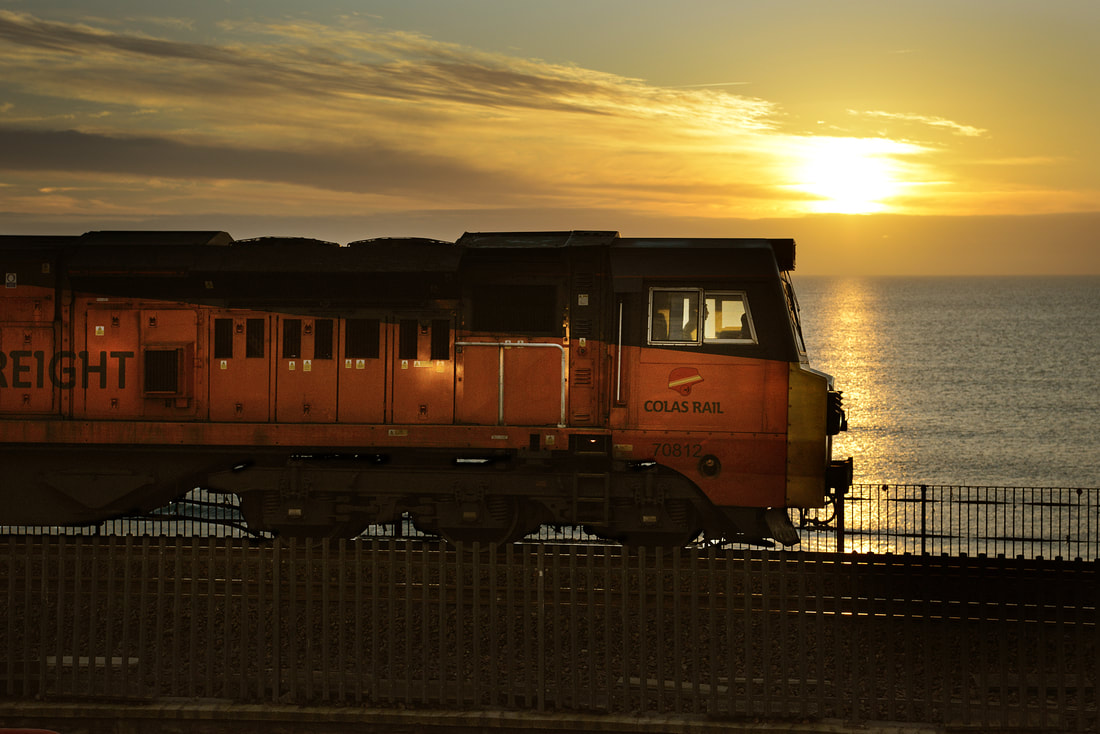 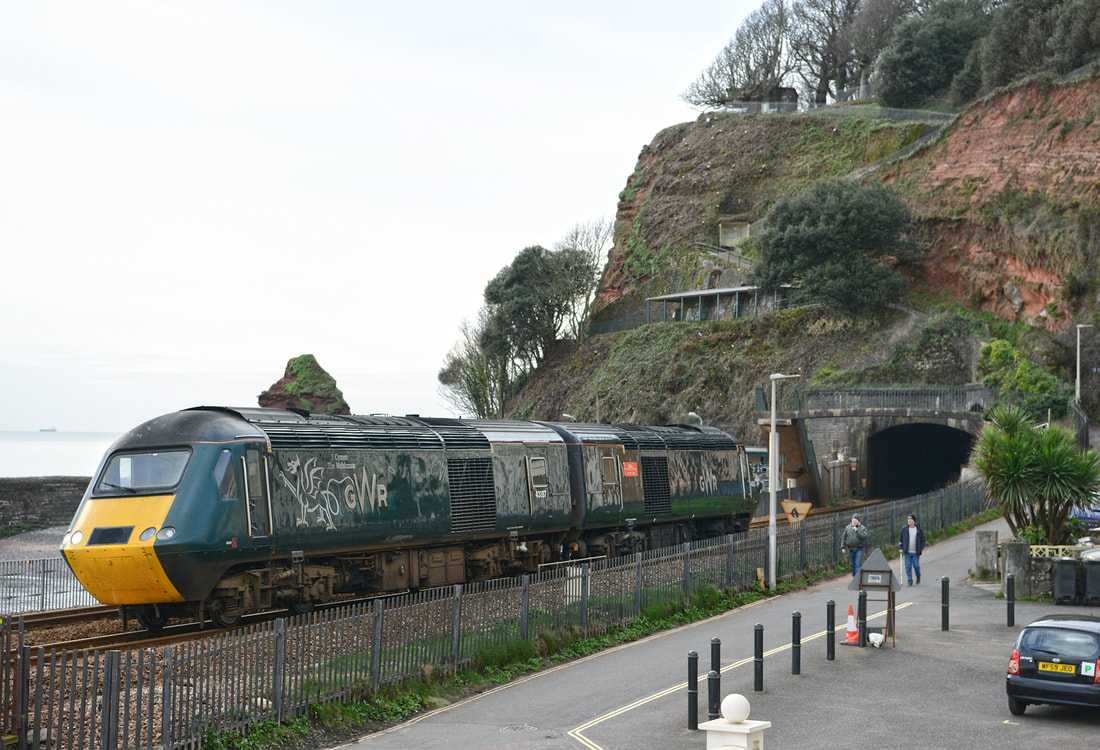 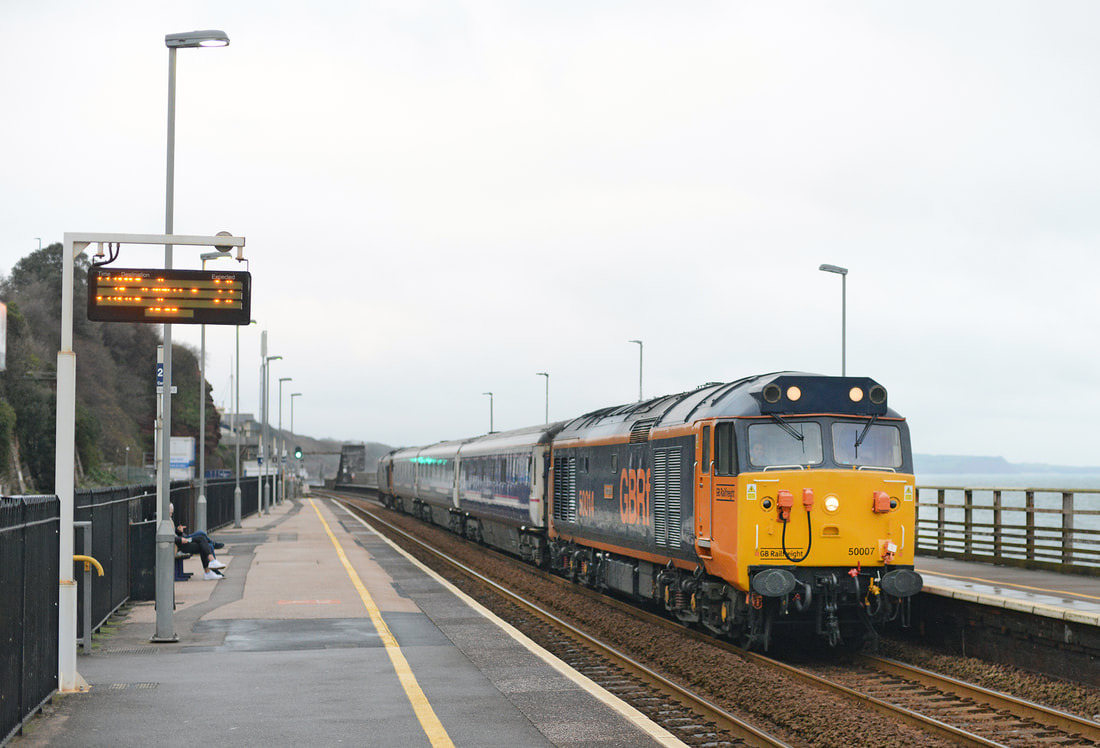 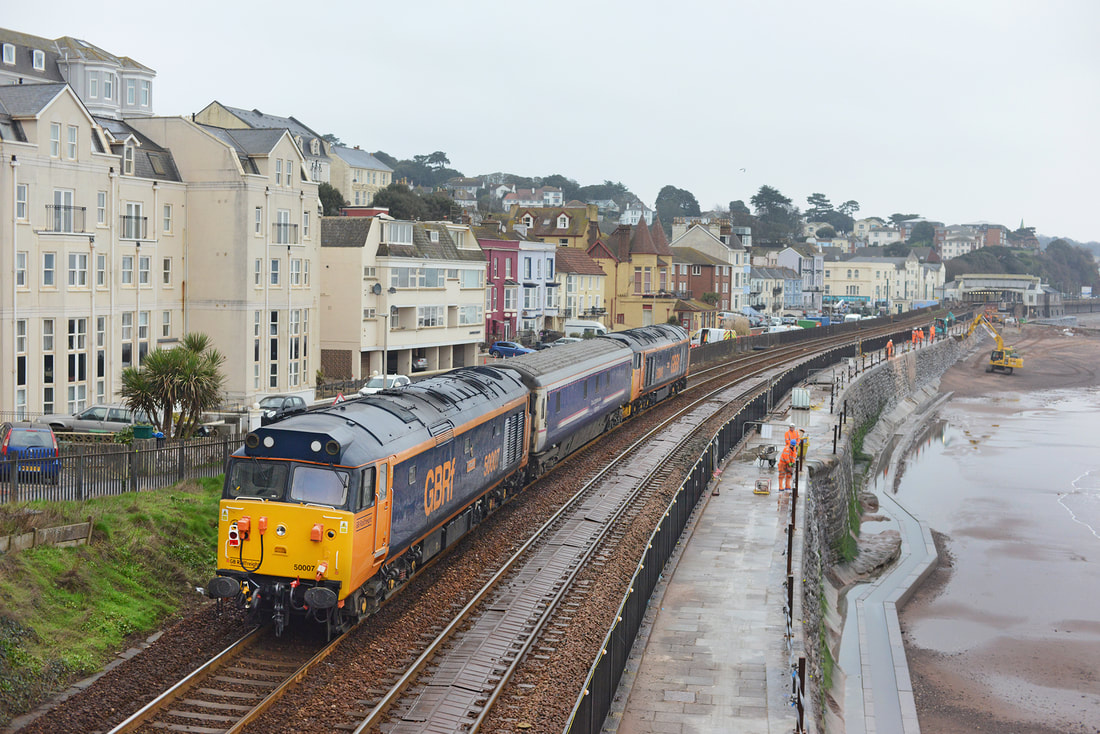