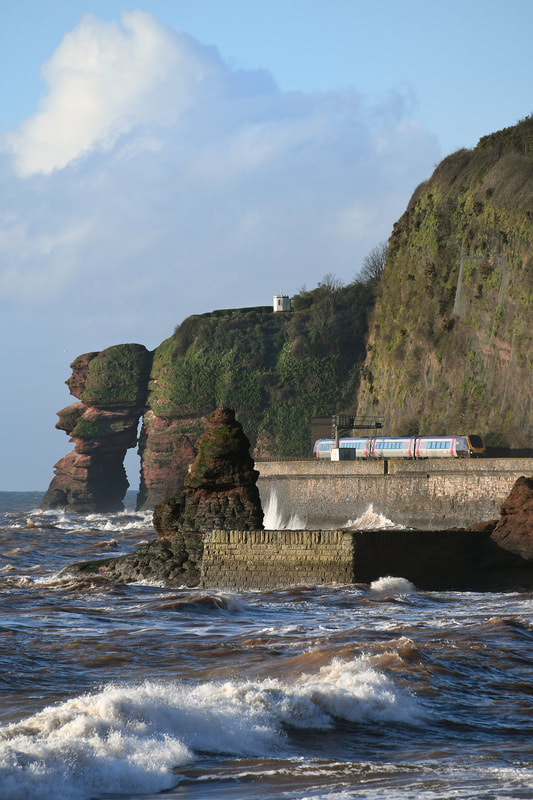 My walk on the final day of March 2020 was nice and early as it was a superb morning for light. Went to investigate the latest wall construction, as over the24 hours we have had 40 cement trucks making deliveries. The back fill is almost complete with about 3ft in height to do for about 30 ft in length. All main wall panels are now in, with just the corner and panels 1 to 8 to fit, these are on the return wall outside the toilet block. I then went to Coryton Cove and captured Voyager 220002 emerging from Parsons Tunnel with train 1S41, the 07.27 Plymouth to Edinburgh. 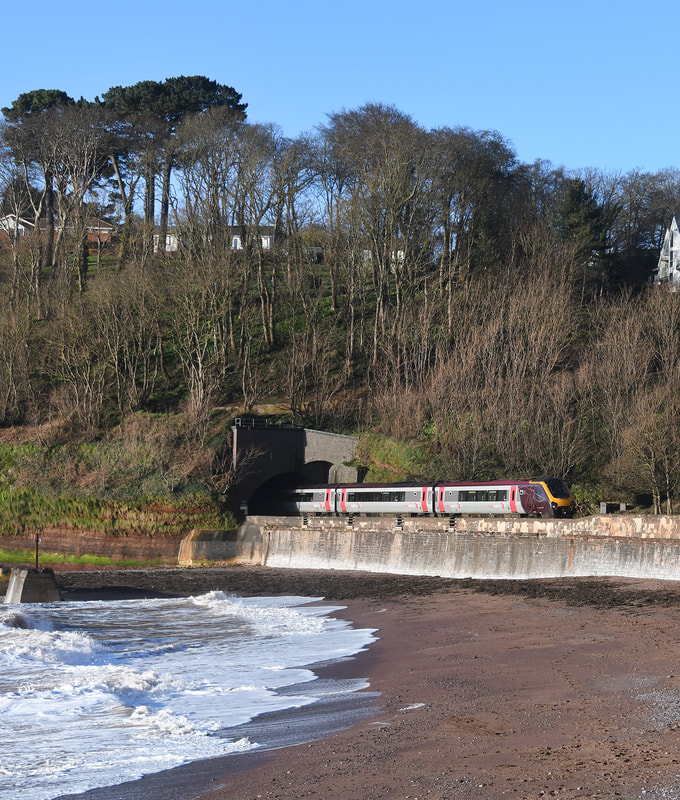 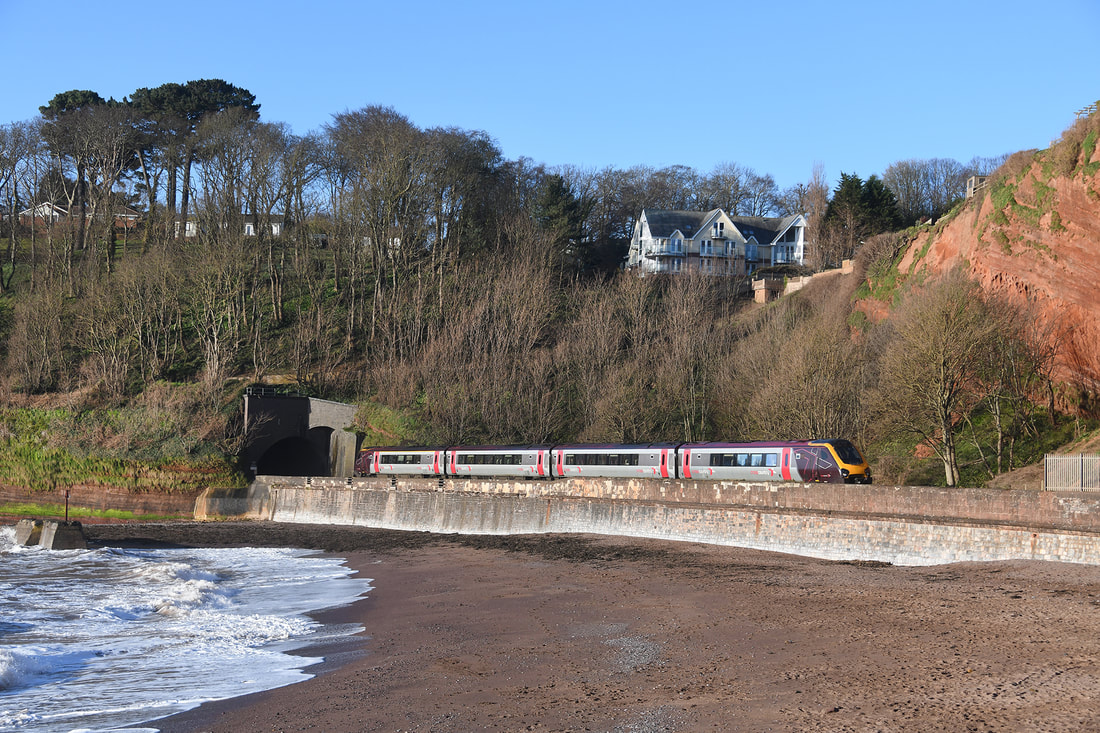 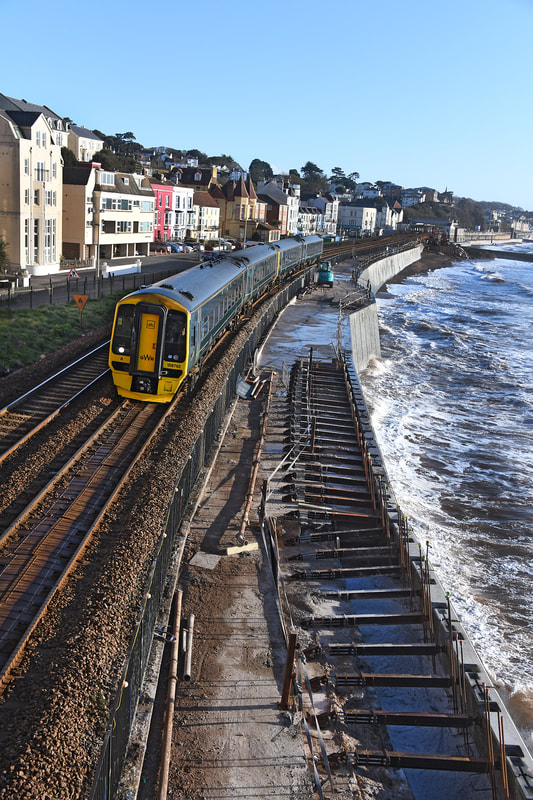 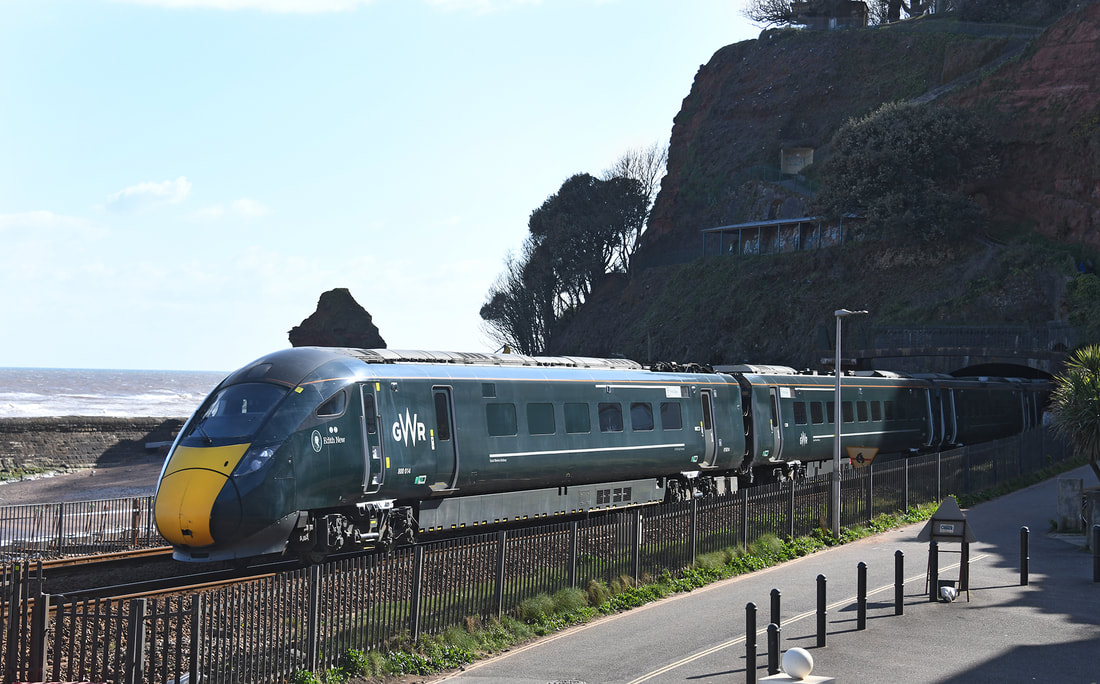 Since the start of IET operation to the west, the vast majority of trains have been formed of 802s, with just an odd 800 in either five or nine car form turning up. However, since the massive cuts to the timetable, 800s have been working a lot of west country services, four different sets have been around today (29 March 2020). Here, set No. 800014 'Edith New'. forms train 1A69, 15.10 Plymouth to Paddington out of Kennaway Tunnel. 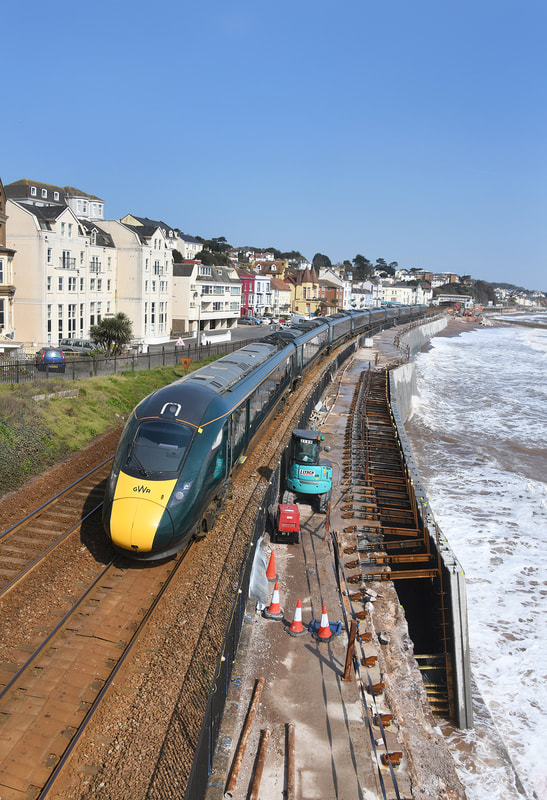 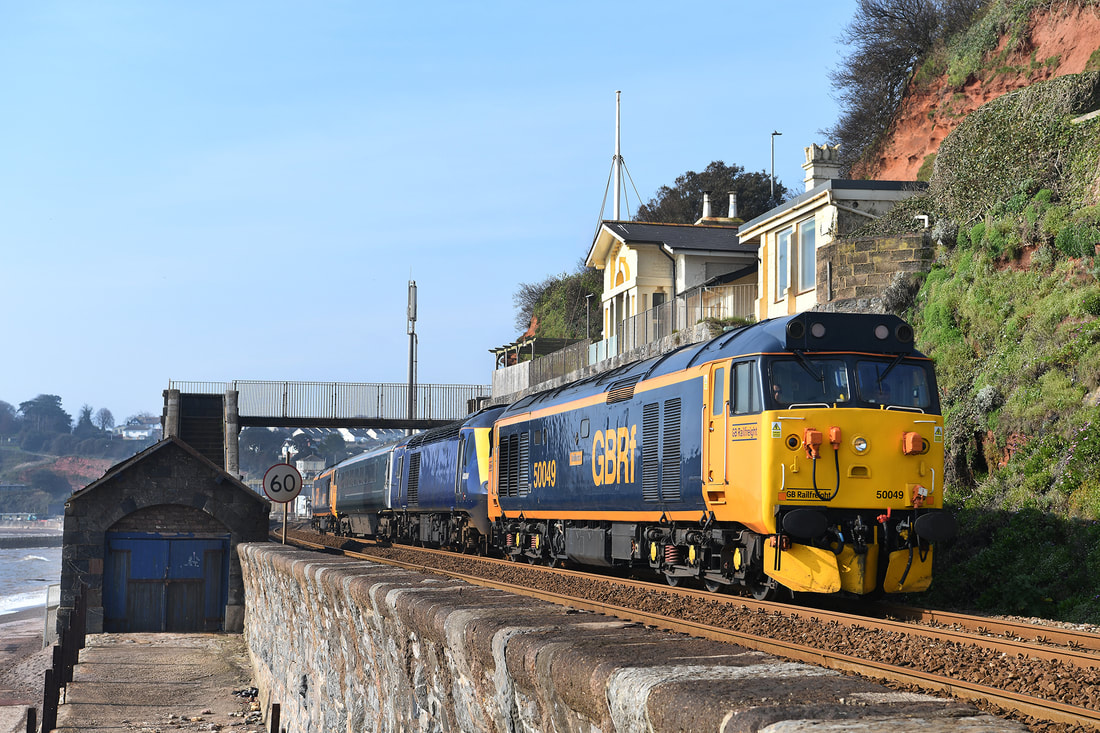 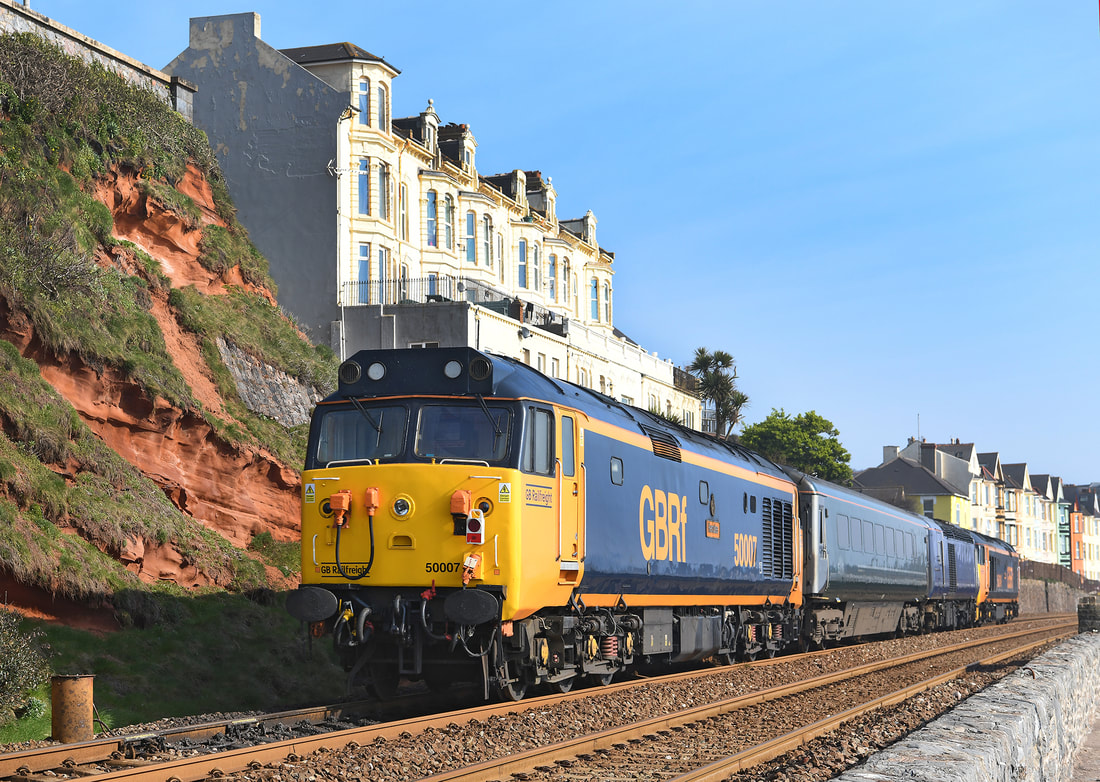 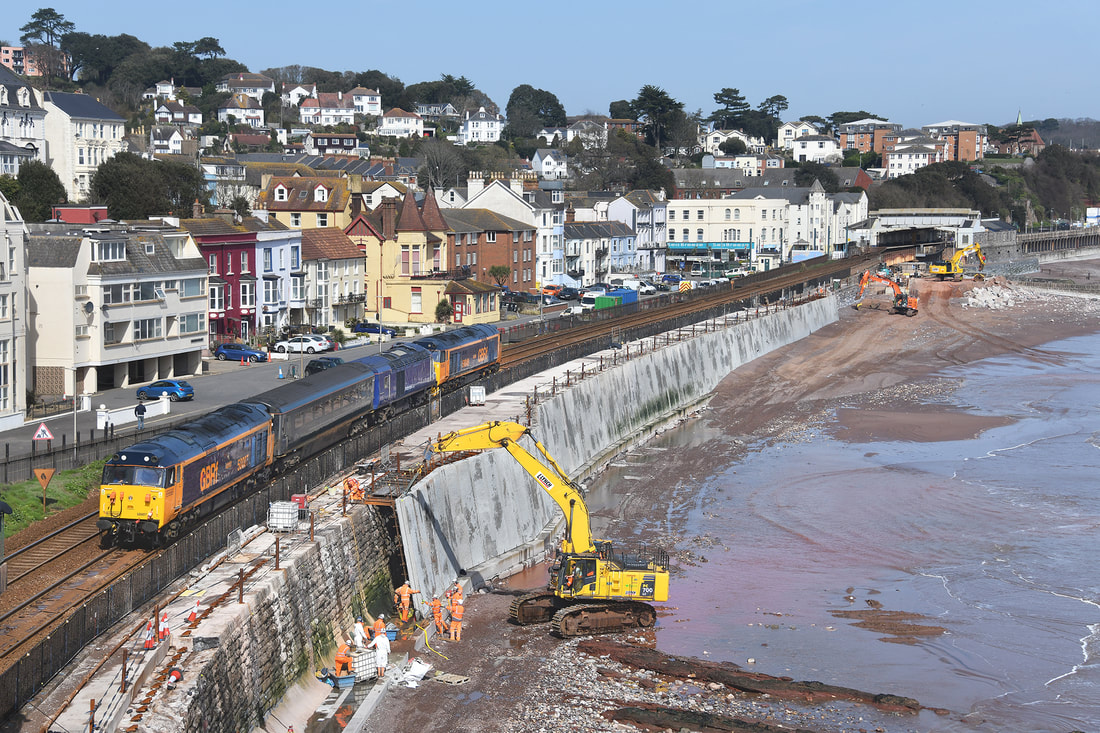 It is rare for be to be excited about an image after all the vast number I've taken, but this one, taken on the morning of 23 March 2020, sort of pleased me. 50007, coach 12161 power car No. 43091 with 50049 on the rear, pass Dawlish with power car move 5Z44 09.16 Long Marston to Laira via Worcester. What makes it better for me, apart from passing my front door, is that at the very same time a crane was lowering in a new wall panel, true history in the making. 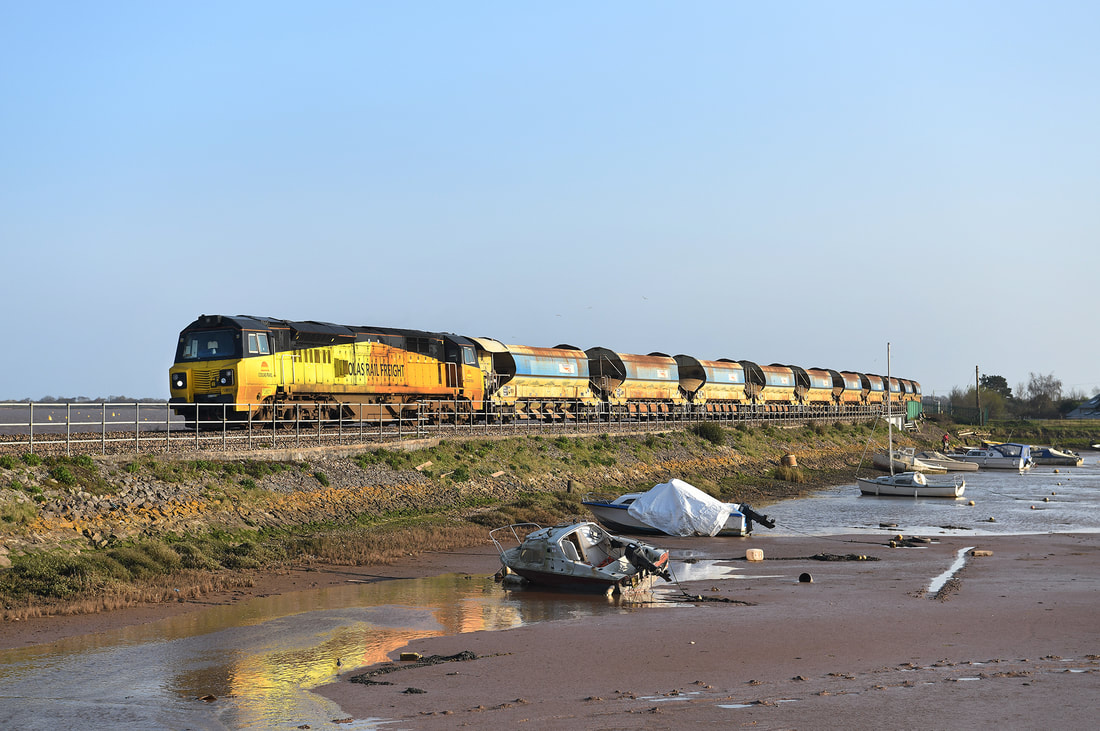 The low setting sun, lights up Colas Rail Freight Class 70 No. 70801 as is crosses Cockwood Harbour on 22 March 2020 with train 6C26, the 13.55 Par to Westbury, formed of ten fully loaded 'Autoballasters'. The train, which worked west on Friday, should have been engaged in weekend engineering work, but this looks not have taken place. Rare to see a Colas 70 look quite as dirty as this. 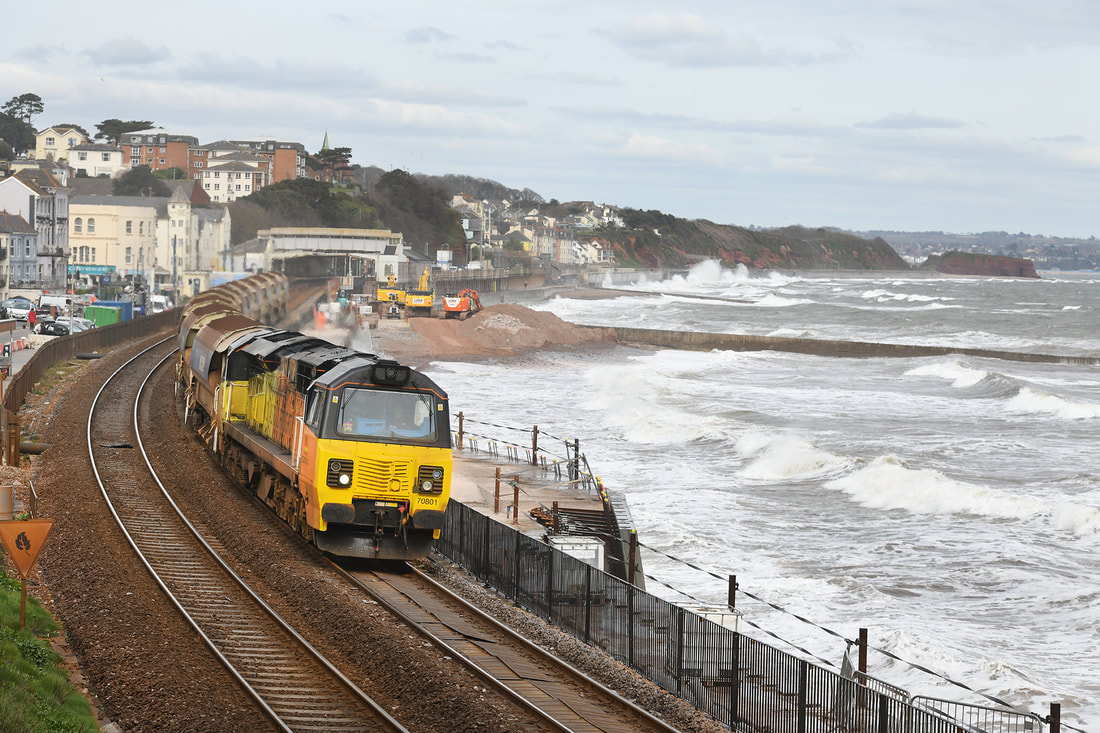 A rare Colas Class 70 for the West No. 70801 was used on 20 March 2020, to power train 6T26, 10.00 Westbury to St Blazey via Bath, formed of loaded ballast hoppers. It is seen passing the recently back-filled wide section of the sea wall around one chain from the eastern portal of Kennaway Tunnel. 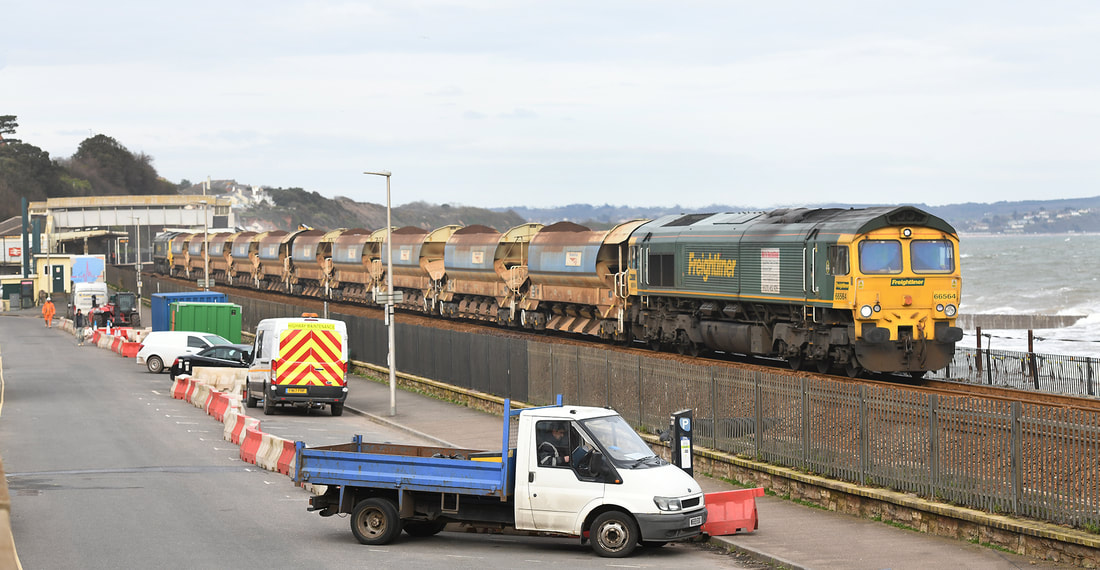 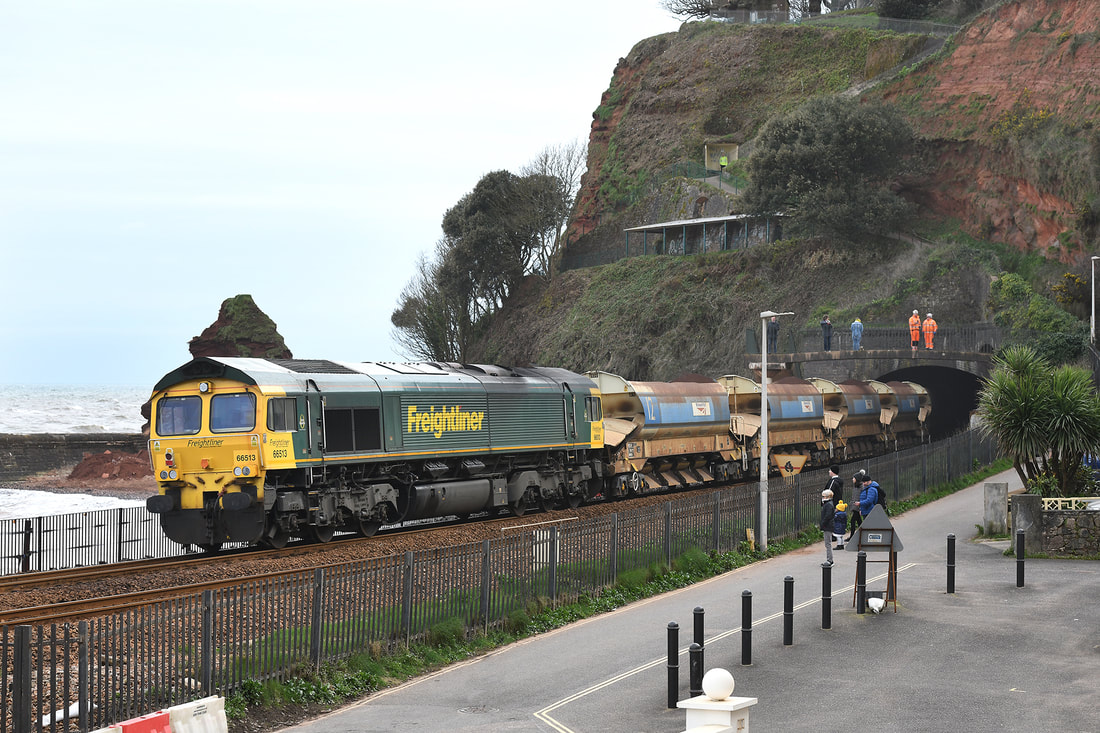 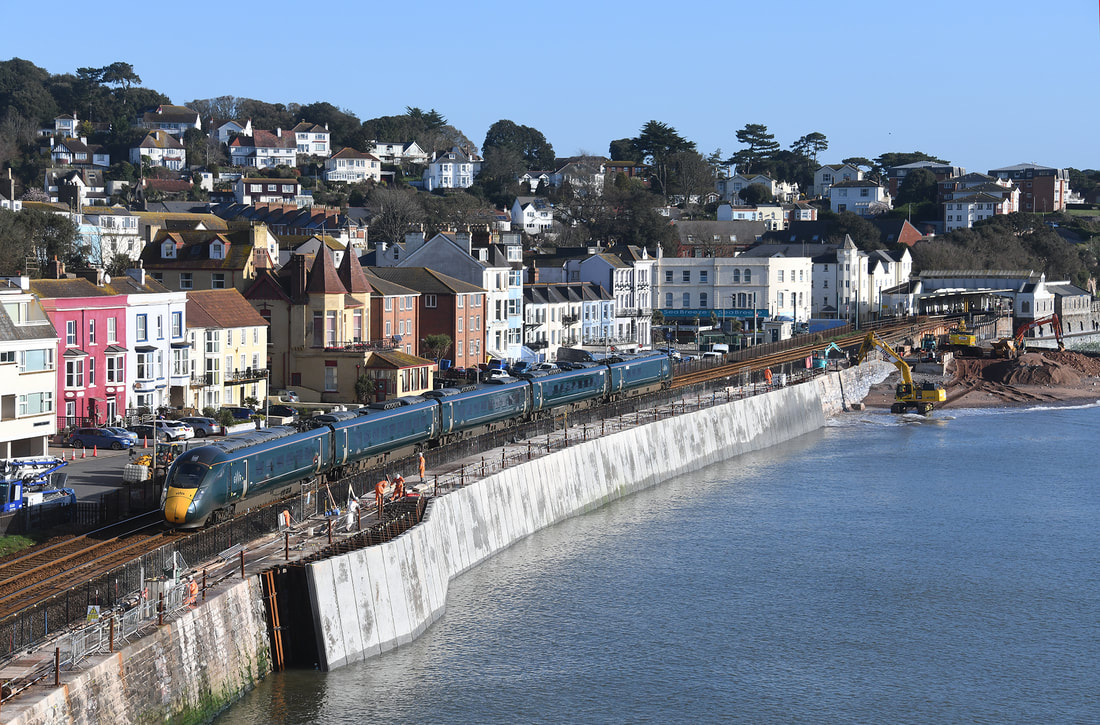 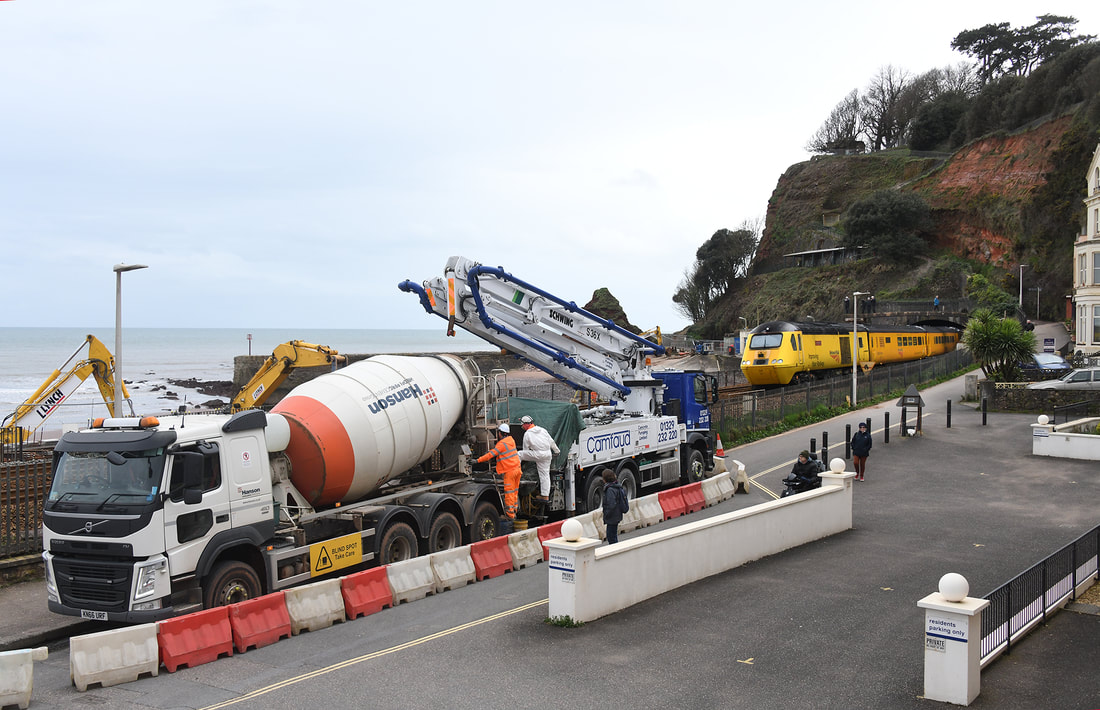 A slightly different view of the New Measurement Train on 13 March 2020, led by 43062, the 1Q18 06.05 Reading Triangle to Paignton via Penzance and Dawlish Warren emerges from Kennaway Tunnel with the Penzance-Dawlish Warren leg of the run and passes a cement pumping operation to backfill the sea wall panels. Some days up to 25 of these cement trucks drop off concrete which is pumped below the tracks to the sea wall. I think todays count is about 14. 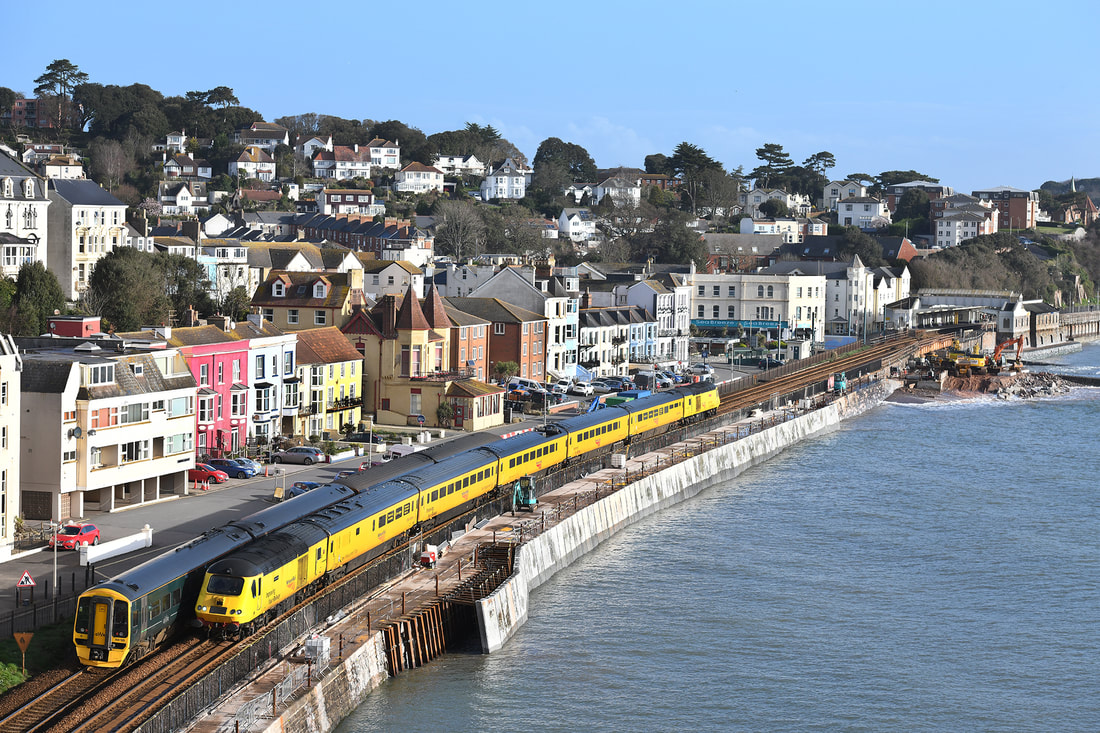 Friday the 13th of March 2020 was NMT day to Penzance. With the set powered by 43013 at the west end and 43062 at the east end working west as 1Q18, the 06.05 Reading Triangle to Paignton via Penzance and Dawlish Warren. The train is seen passing the sea wall work on the approach to Kennaway Tunnel, passing Class 158 No. 158769 on the rear of train 2E01, 05.40 Penzance to Exeter St Davids. Not sure, but would have preferred the NMT to have been alone in the pic. 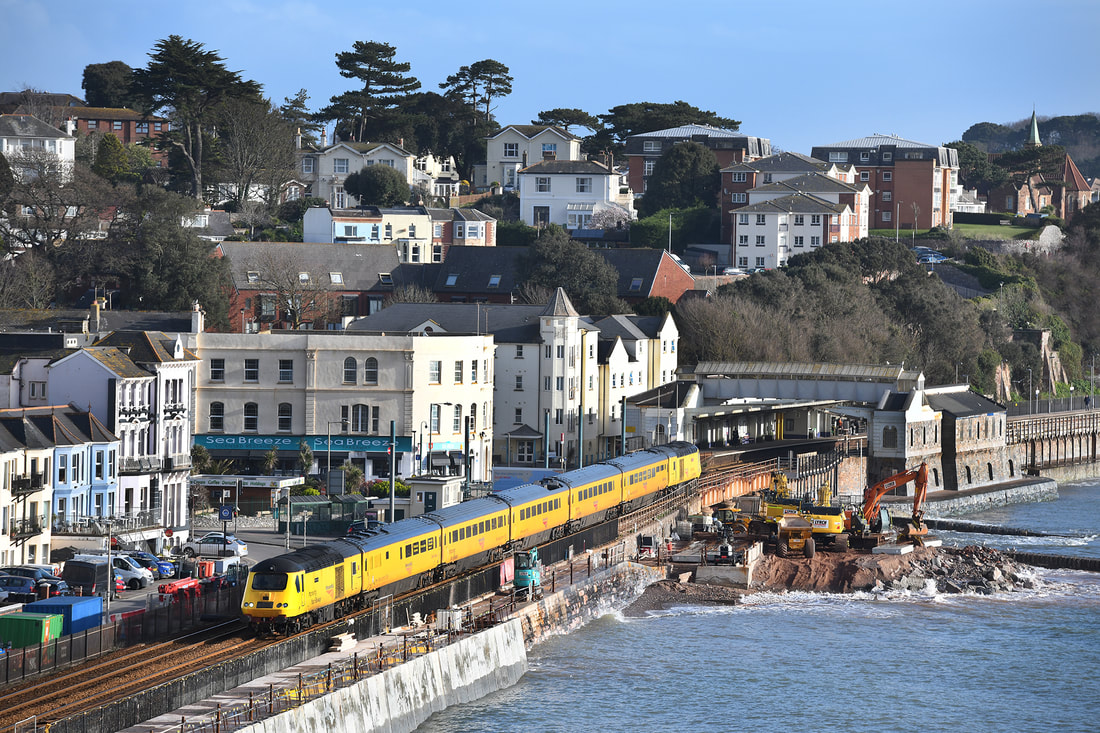 Friday the 13th of March 2020 was NMT day to Penzance. With the set powered by 43013 at the west end and 43062 at the east end working west as 1Q18, the 06.05 Reading Triangle to Paignton via Penzance and Dawlish Warren. The train is seen passing the sea wall work on the approach to Kennaway Tunnel. 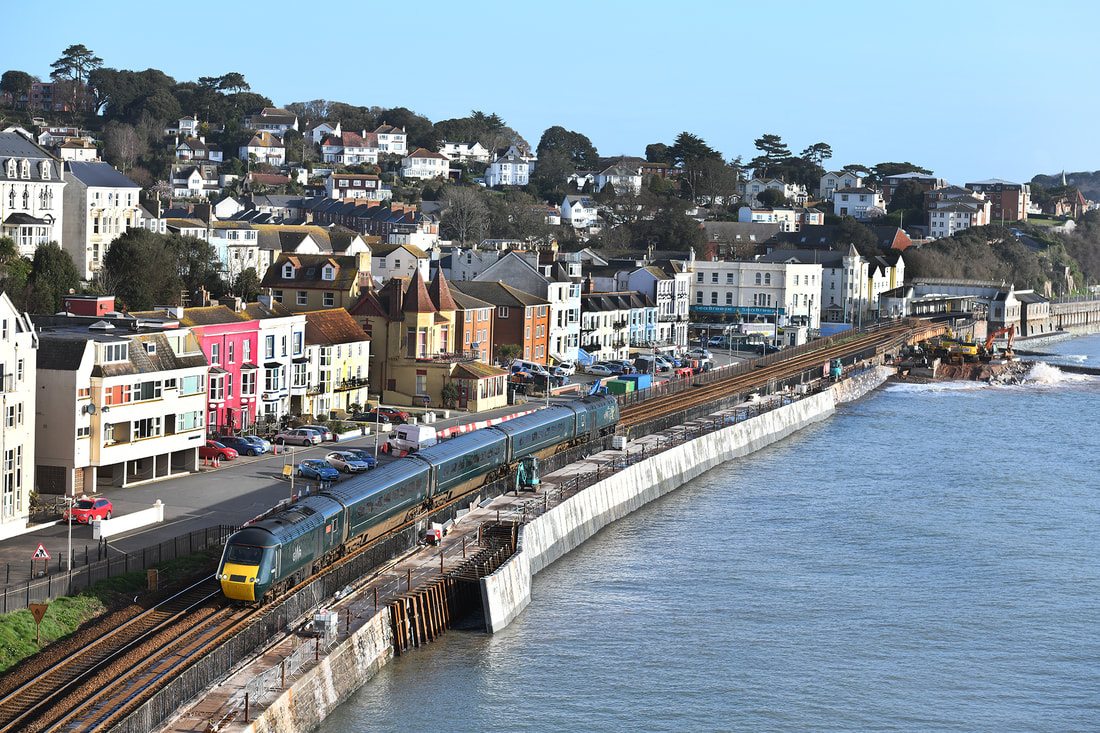 Although currently 10 of the fleet of 11 2+4 'Castle' HST sets are with Great western, the short formed set LA93 continues to be a regular performer. On 13 March 2020, modified vehicles 48130, 48126 and 49112 are power by Class 43s Nos. 43189 and 43188 forming train 2C07, the 06.44 Bristol Temple Meads to Penzance. The train is skirting the building work at Dawlish, where a new wider/higher sea wall between the viaduct and Kennaway Tunnel is currently under construction. The new concrete panels are seen in position with around 6 panels added each day. A new walkway is yet to be placed on top of the wall, which will raise its height. We are told this work will be complete to enable the walkway to re-open and the beach made available for the peak summer season. 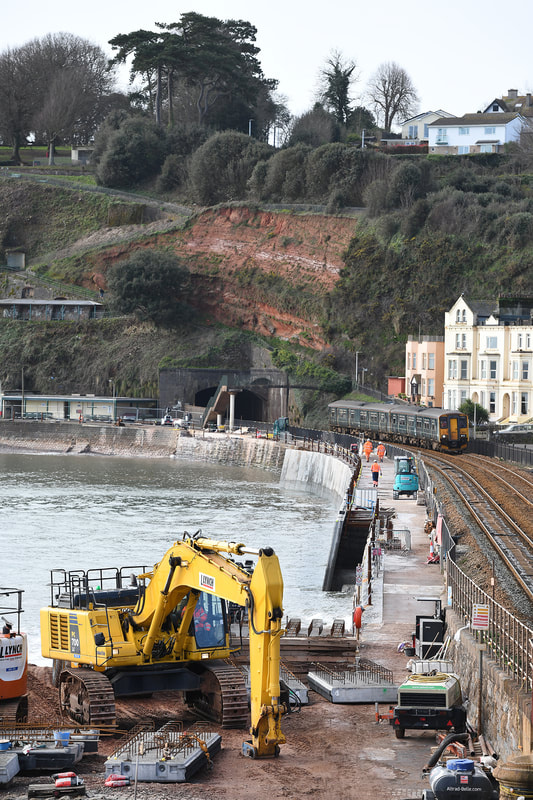 With a pair of Class 150s emerging from Kennaway Tunnel on 12 March 2020, this view shows the Dawlish sea wall construction work at the viaduct end. The big yellow Komatsu PC700 machine in the middle is the guy which picks up the wall panels from the short side and plods along the beach to the fixing location. Several short wall sections are seen laying on the path and beach awaiting fixing, these are labelled 1 to 6 so are for this close end. The width of the wall is clearly seen. Don't forget a top section is yet to be added, plus a stairway and ramp to be provided at this end. 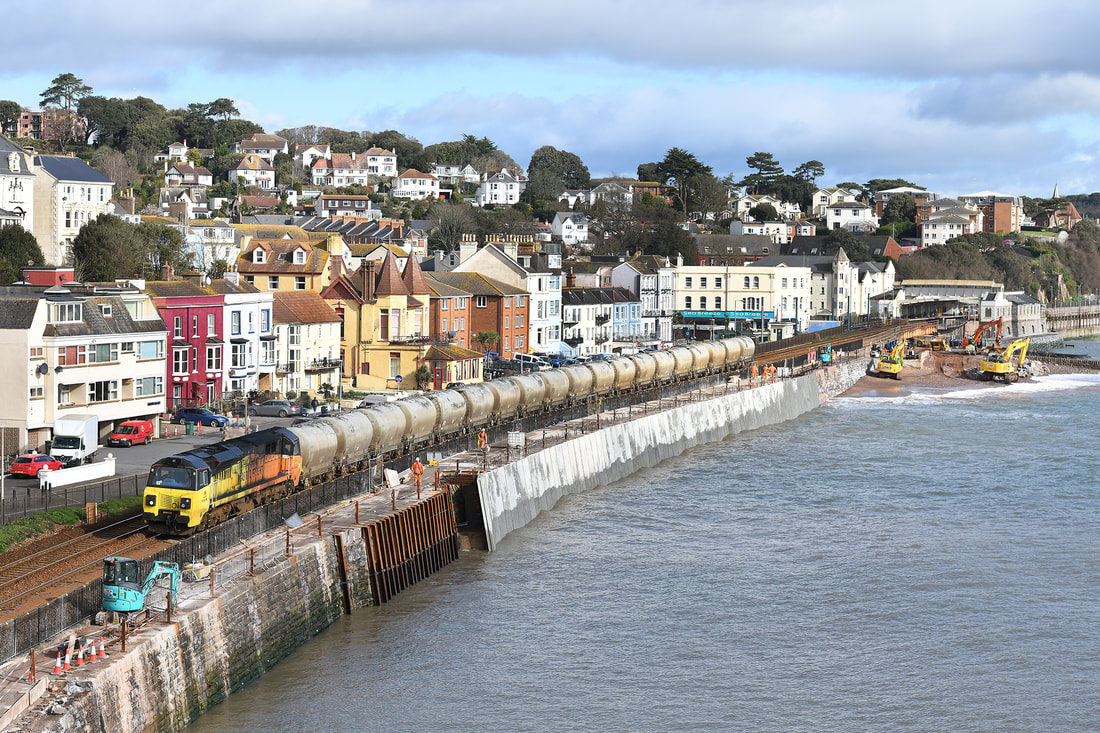 It looks like Spring had sprung in Dawlish on 11 March 2020, when Colas Rail Freight Class 70 No. 70809 heads past the new sea wall construction with train 6C35, 05.46 Aberthaw to Moorswater loaded cement. Work over the last few days and weeks has progressed quickly with more than half the new wall panels in position, many of which have now been in-filled. At the near end new steel plates have been attached to the wall onto which the new concrete panels will be fixed. 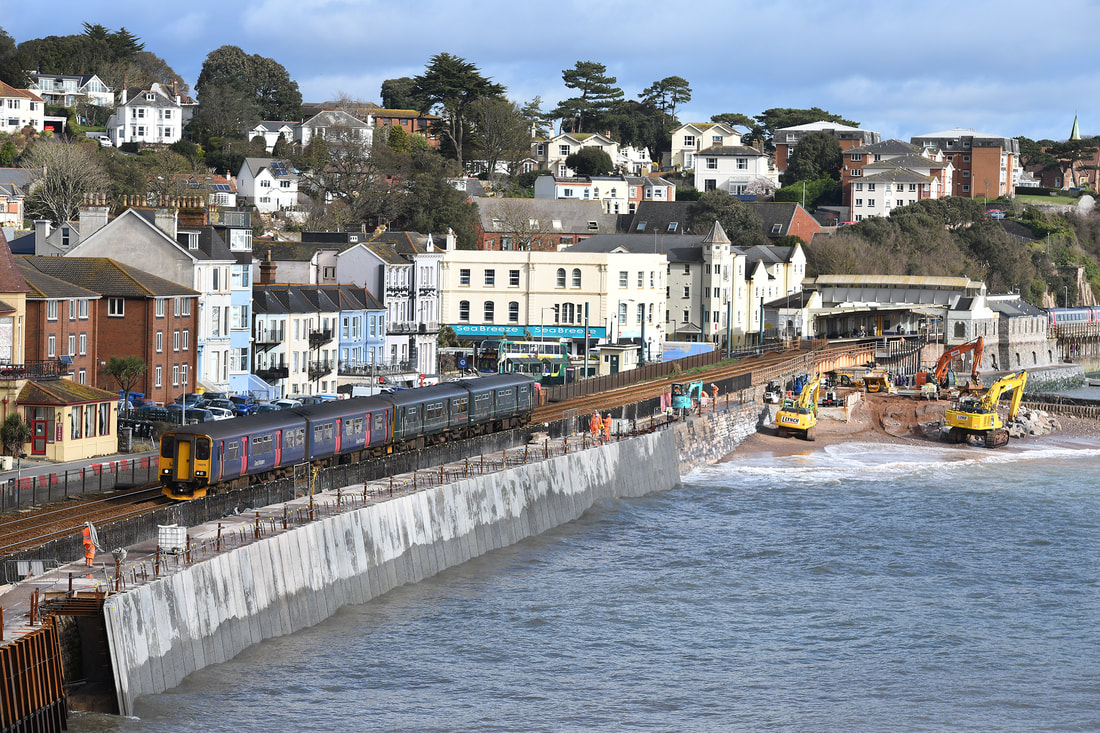 One of only two remaining blue-liveried FGW DMUs No. 150219 leads green-liveried set No. 150216 adjacent to the sea wall work site at Dawlish on 11 March 2019, forming train 2T12 the 09.24 Exmouth - Paignton. More than half of the concrete panels have now been erected and a huge amount of the required in-fill has been completed. The two ends of the wall close to the vaduct and  Kennaway Tunnel have still to be completed, but the town has been told work is on a (revised) target for a part completion for the main summer season. The new top (walkway) section has still to be installed. 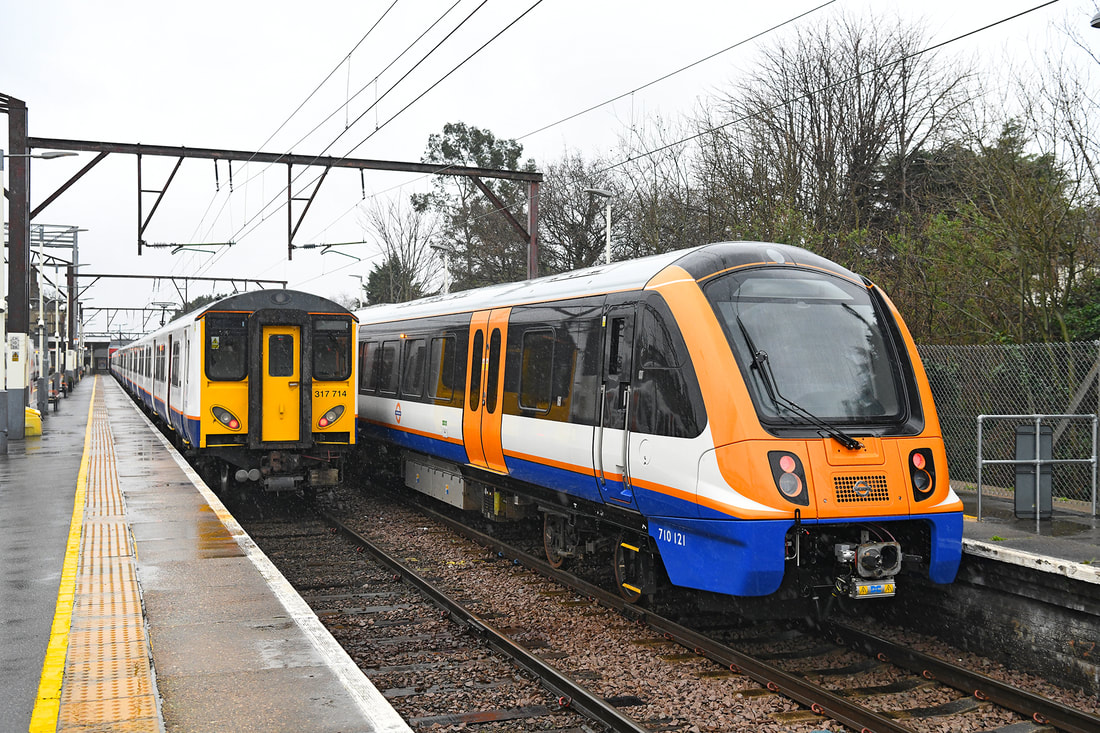