Departure of the Dawlish landmark. After being in Dawlish from November 2020, the platform Wavewalker 1 finally departed from Dawlish during the late afternoon on 25 February 2021 is a complex operation. Wavewalker1 walked out from the area behind the station the previos afternoon and into the night and stopped around three hundred yards of the coast line. Early 25 February the tug 'Dutch Pearl', based in Zierikzee, south of Rotterdam, arrived around 05.00 and sat just off the coast until 15.00, when it pulled towards the platform, attaching to and turning the platform before departing around 17.00 to Newhaven. It was an interesting operation and thankfully the weather was kind. I doubt we will ever see Wavewalker1 in Dawlish again. It drew quite a following while it was here.  Click images to enlarge 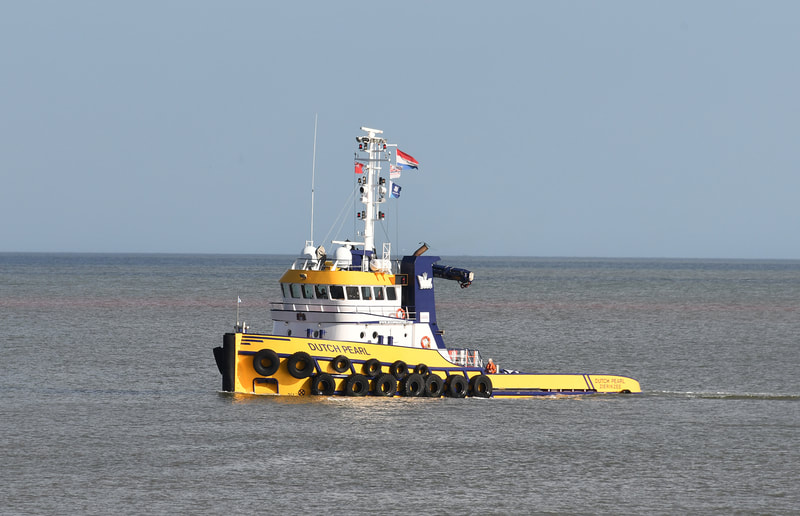 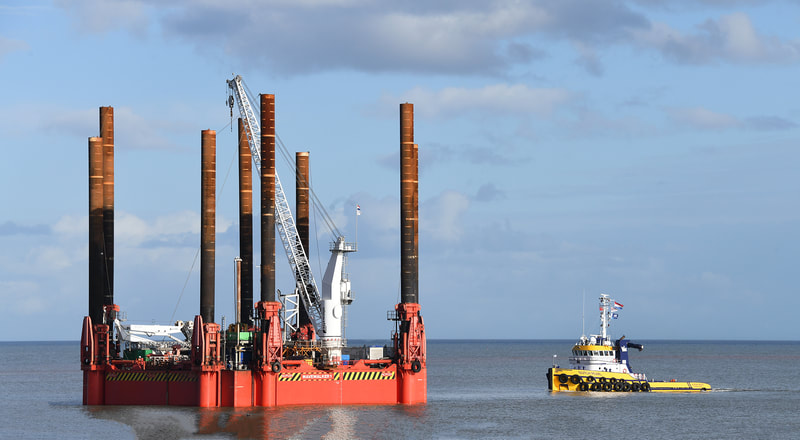 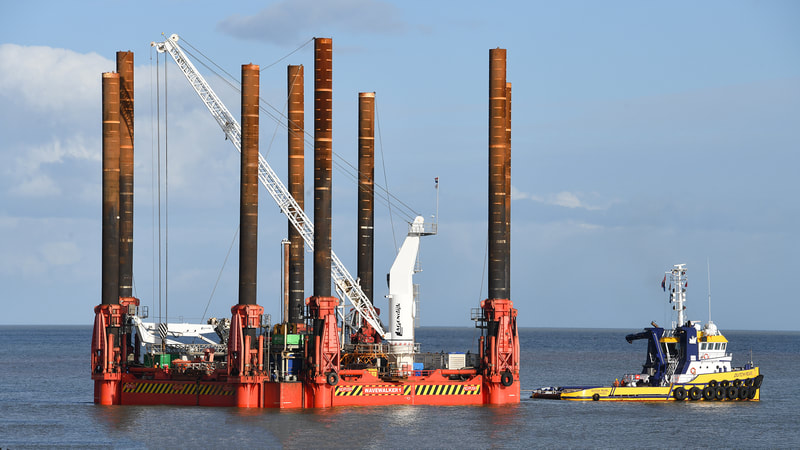 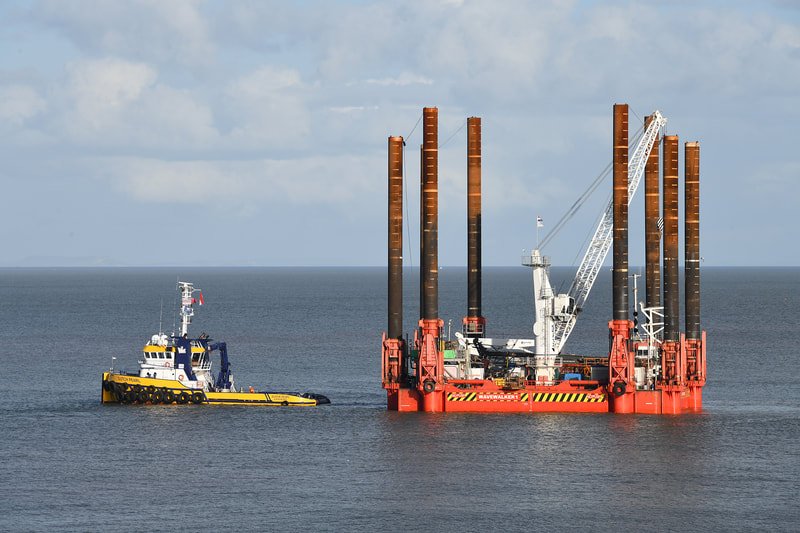 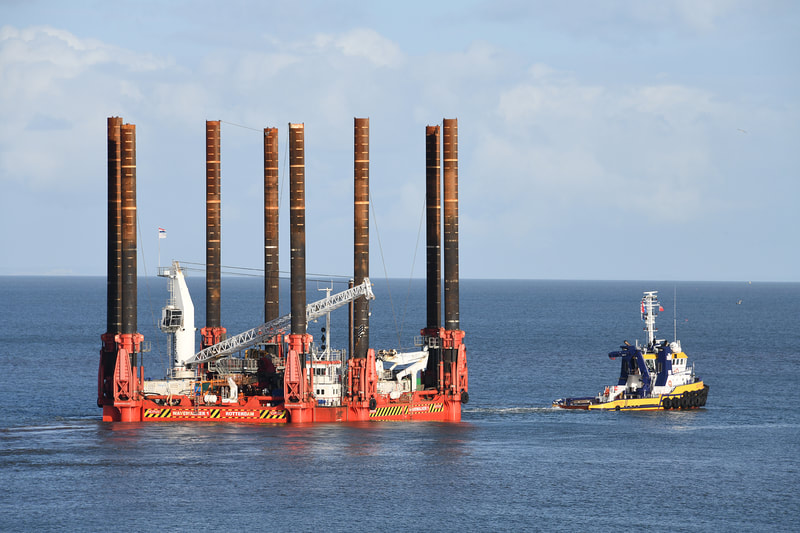 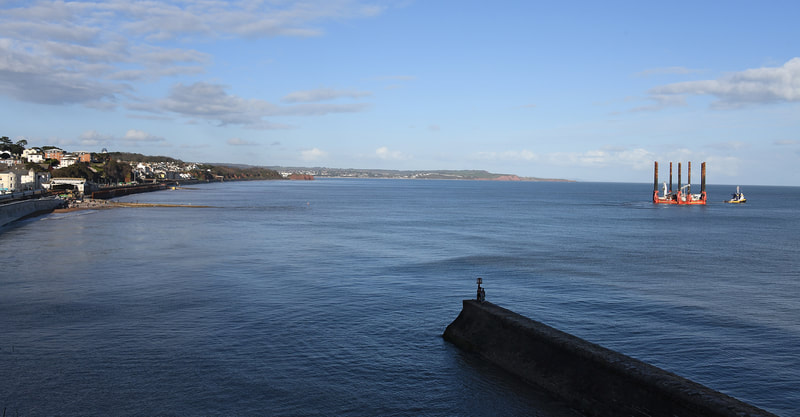 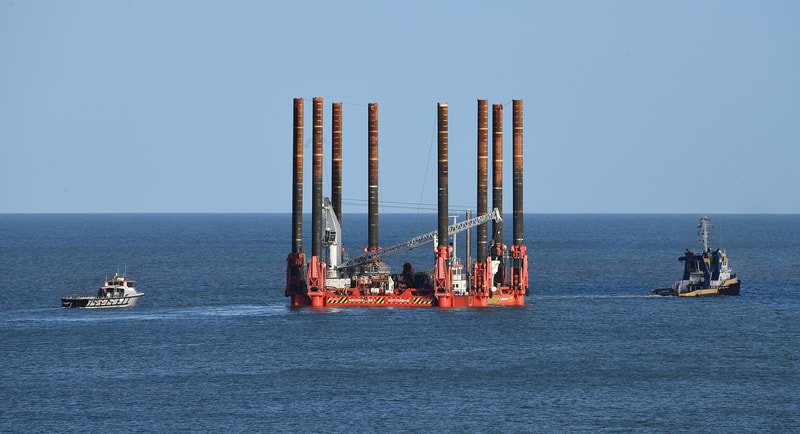 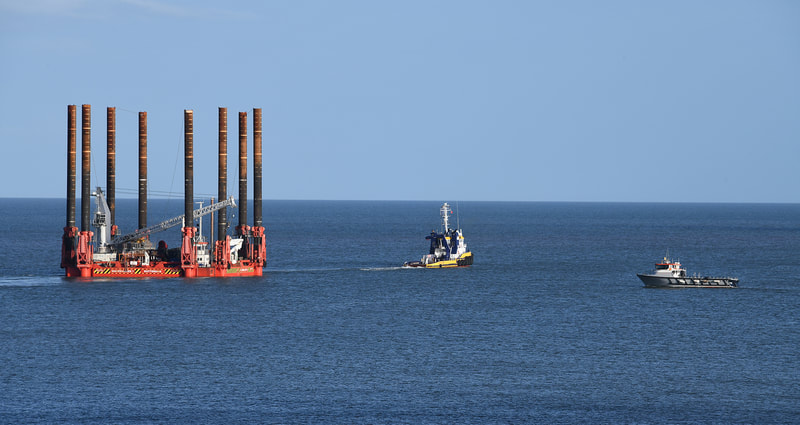 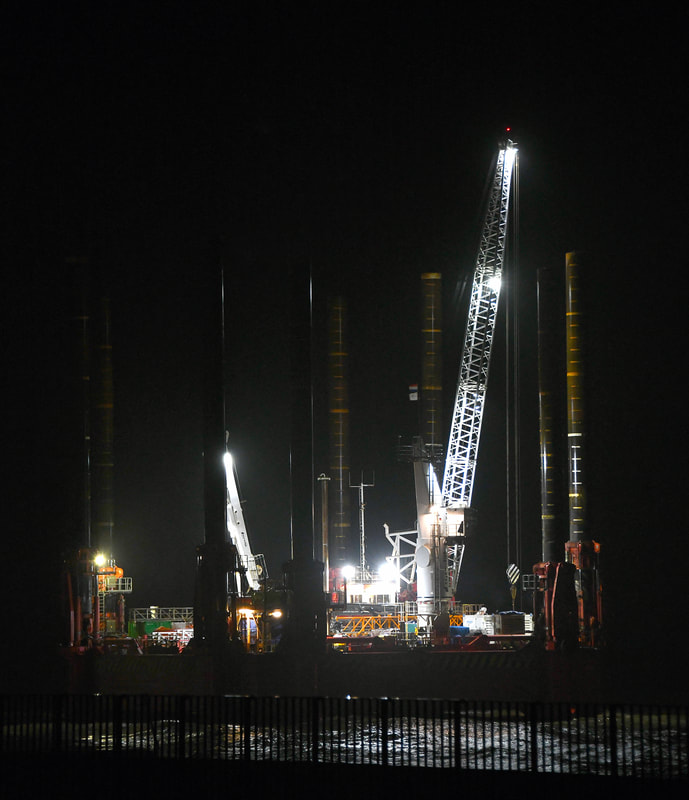 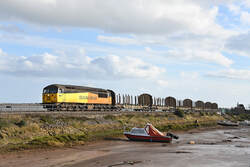 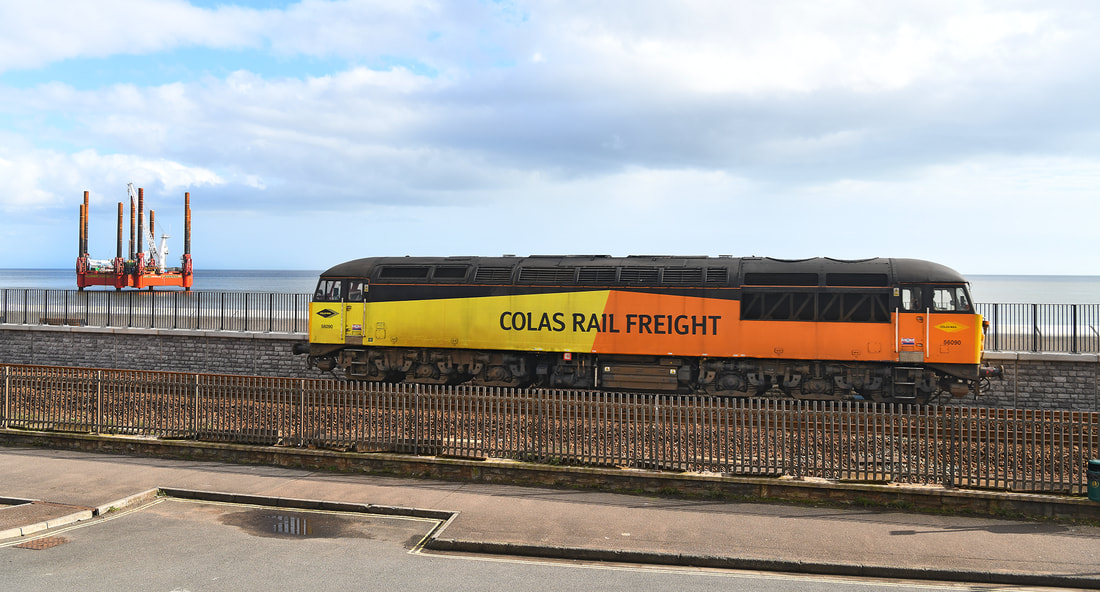 The only time that Wavewalker1 has got close and personal with a Class 56 is today, 25 February 2021, when Colas Rail Freight No. 56090 is captured passing the platform while running as 0Z56 12.20 Taunton to Newton Abbot Hackney Yard, to collect a rake of log carrying wagons and move them to Gloucester. 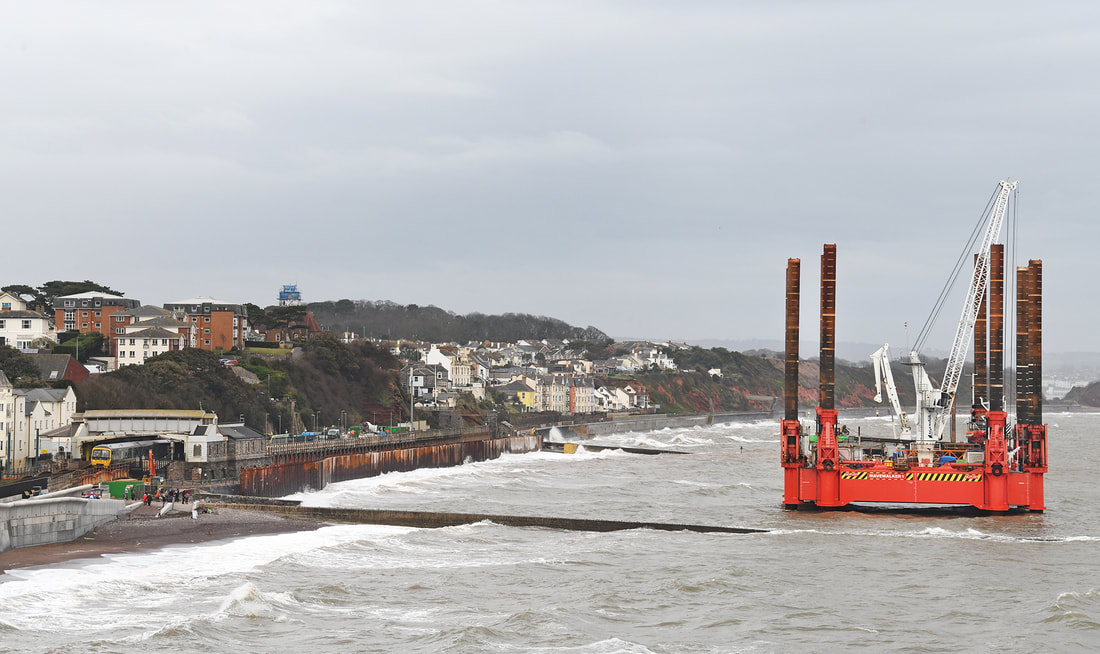 After arriving in Dawlish on 6 November 2020 and working to install over 350 piles between the viaduct and Coastguards bridge, 'Wavewalker 1' started its departure on 24 February 2021, 'walking' out to sea to get into deeper water before the tug 'Dutch Pearl' arrived to haul it away. On the left, Class 166 No. 166206 pulls out of Dawlish station with train 2T20, 13.23 Exmouth to Paignton. 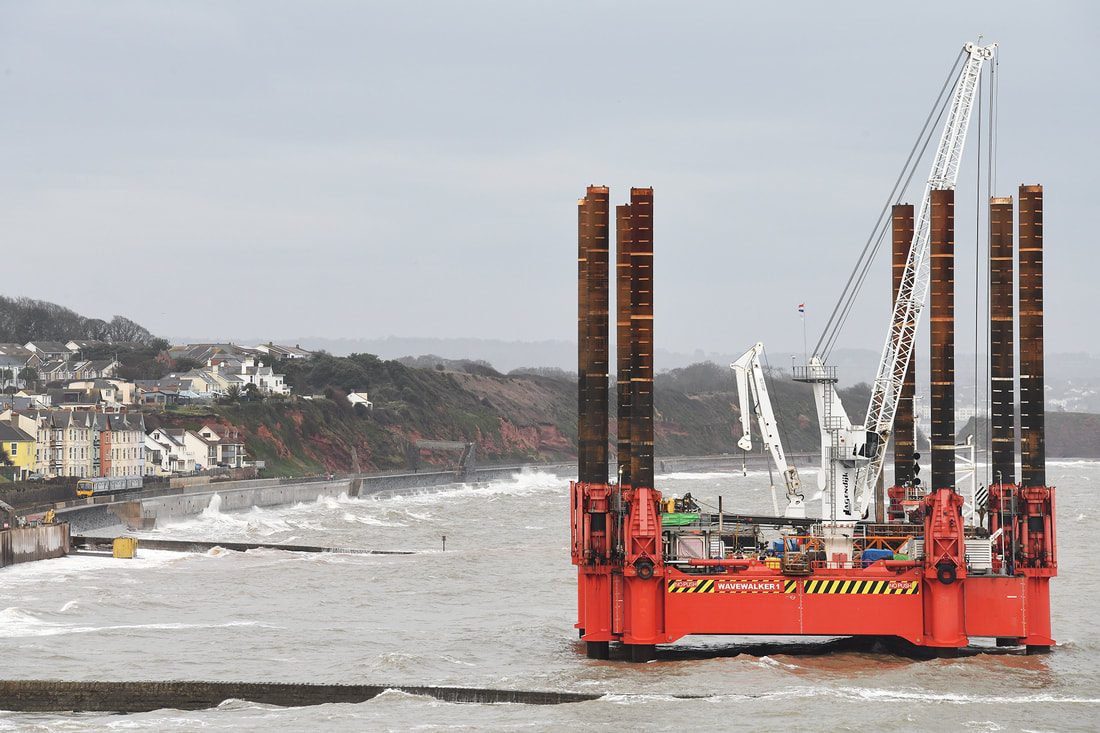 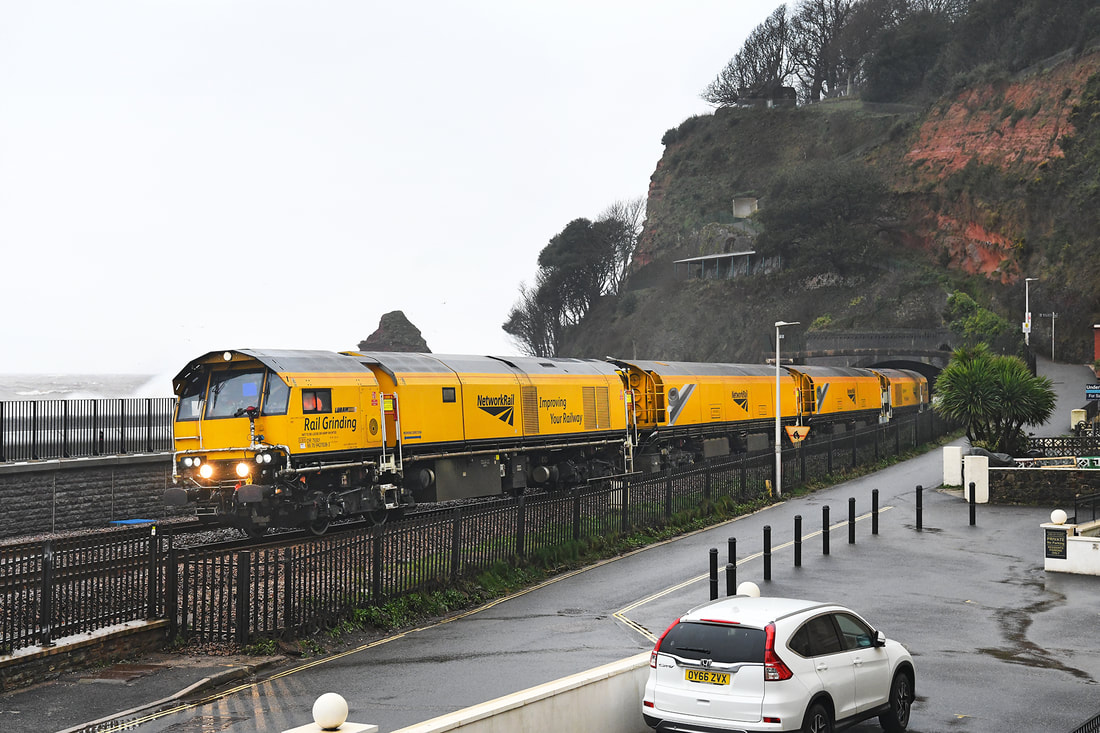 With the railway closed again during the morning of 14 February 2021 through Dawlish due to rough seas and flooding, the Network Rail grinder was used to inspect the up line at walking pace. Formed of DR79301, DR79302, DR79303 and DR 79304, the set was running as 4Q01, 08.37 Teignmouth to Exeter Riverside via Newton Abbot. It is seen emerging from Kennaway Tunnel. Nice to see this machine on the sea wall in daylight. Thank god for high ISOs. 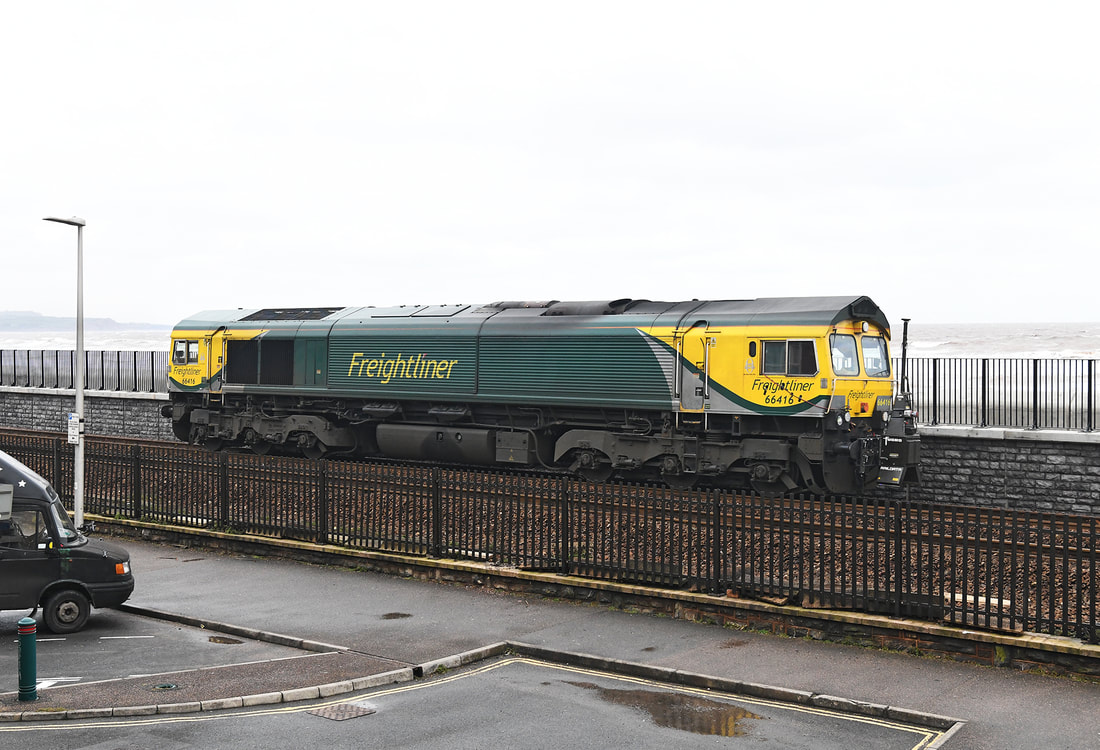 On Saturday 13 February 2021, Freightliner operated a return run from Stoke Gifford yard to Lipson Junction with an extra run from Lipson Junction to Dawlish Warren and return with loco 66416 mounted with the RILA measuring unit on the west end. Due to ongoing issues on the sea wall involving flooding, ballast damage and a signal post knocked over at Starcross, the first westbound run operated over the reversible, but the second Dawlish Warren to Lipson Junction operated over the correct line. It is seen here approaching Kennaway Tunnel, with the recording gear mounted on the buffing gear. 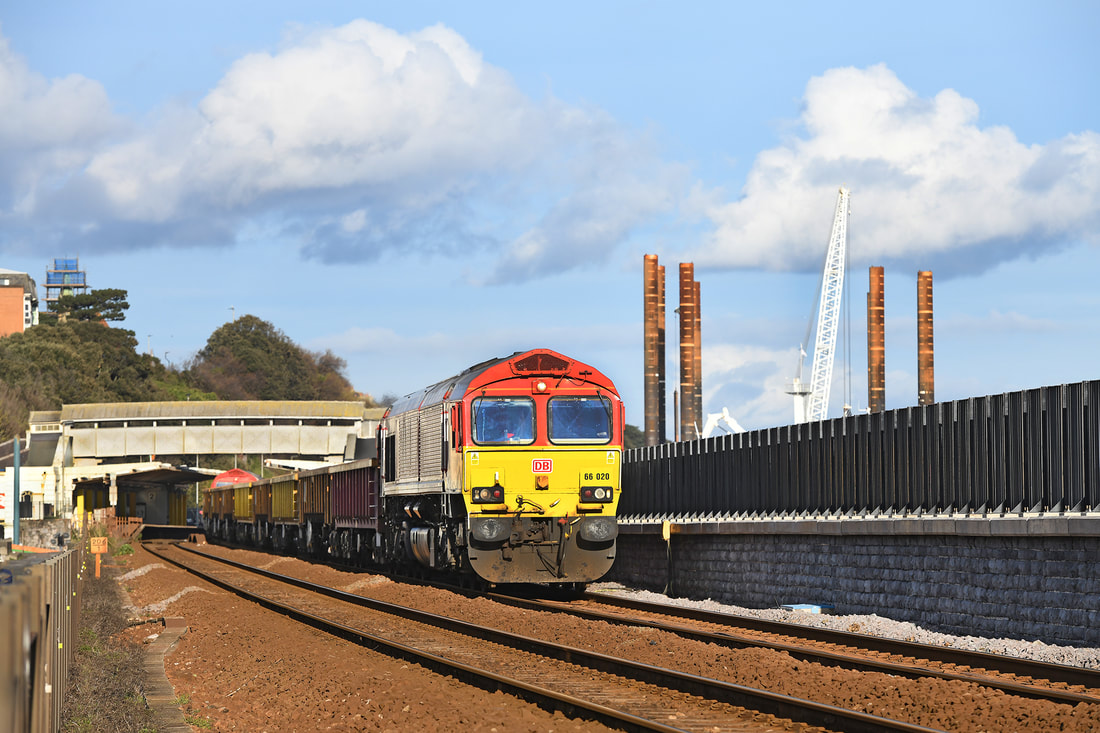 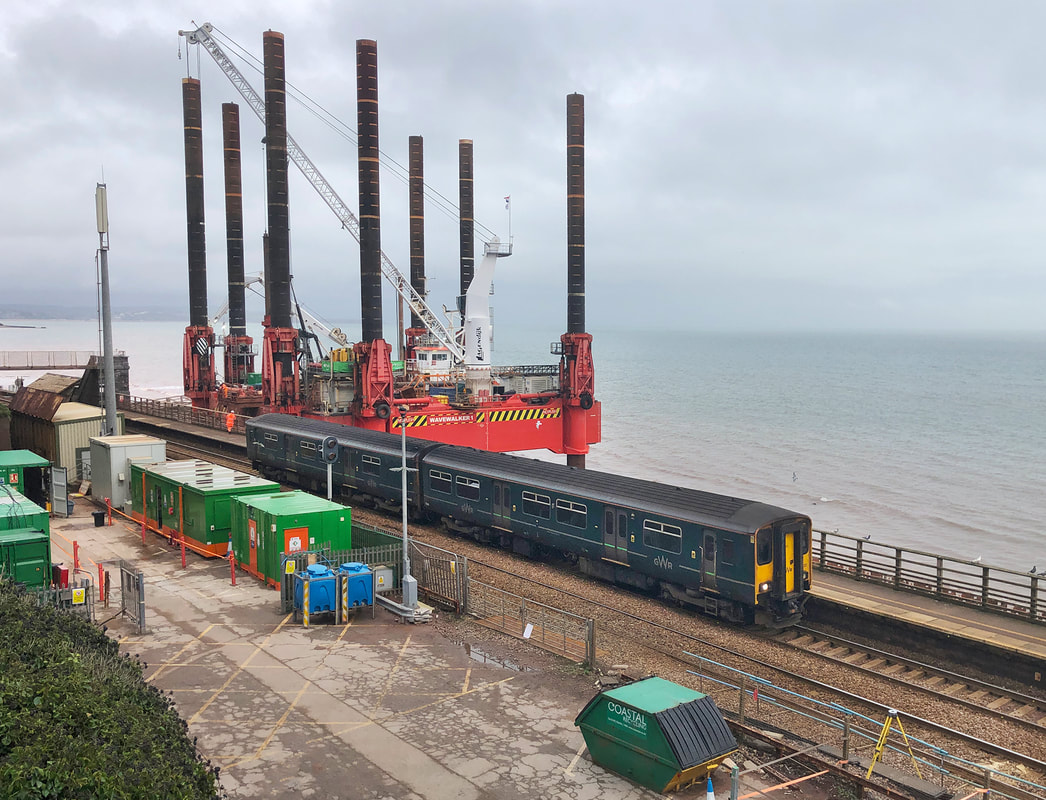 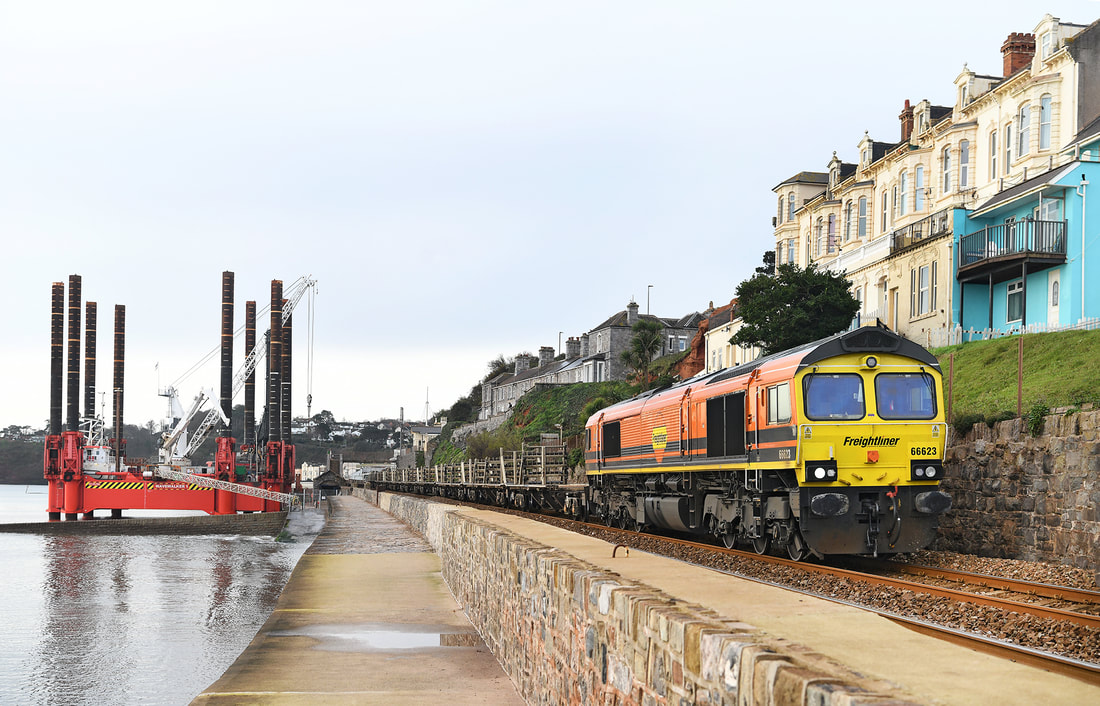 With the Dawlish Landmark 'Wavewalker 1 at its eastern extremity on the sea wall, Genesee & Wyoming (Freightliner) Class 66/6 No. 66623 pulls away from Coastguards bridge on the Dawlish sea wall on Sunday 17 January 2020 with train 6C97, the 08.45 Burngullow to Westbury empty long welded rail set. 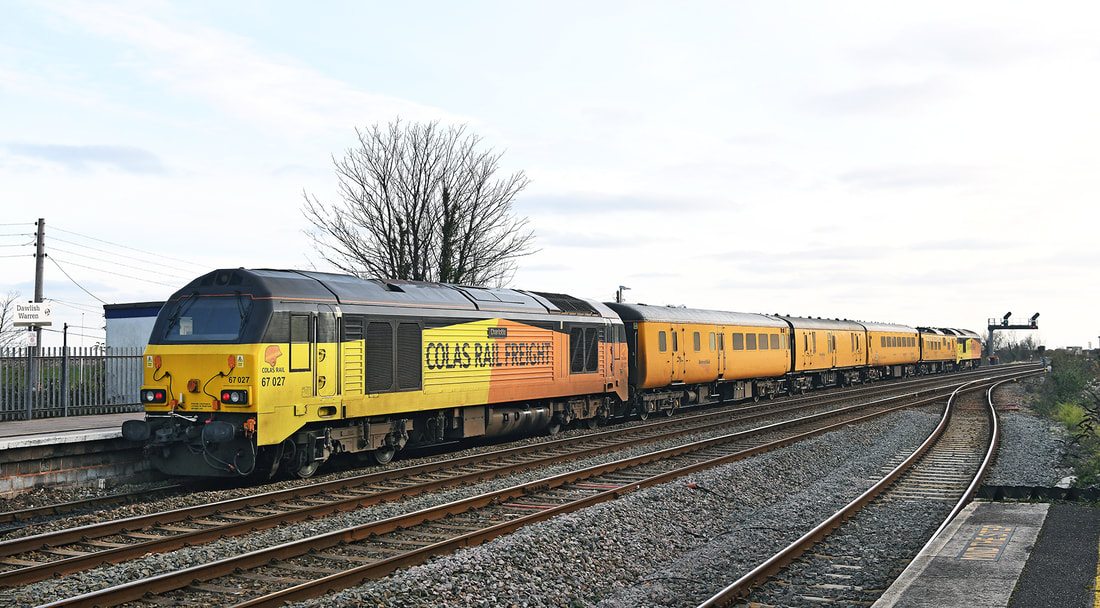 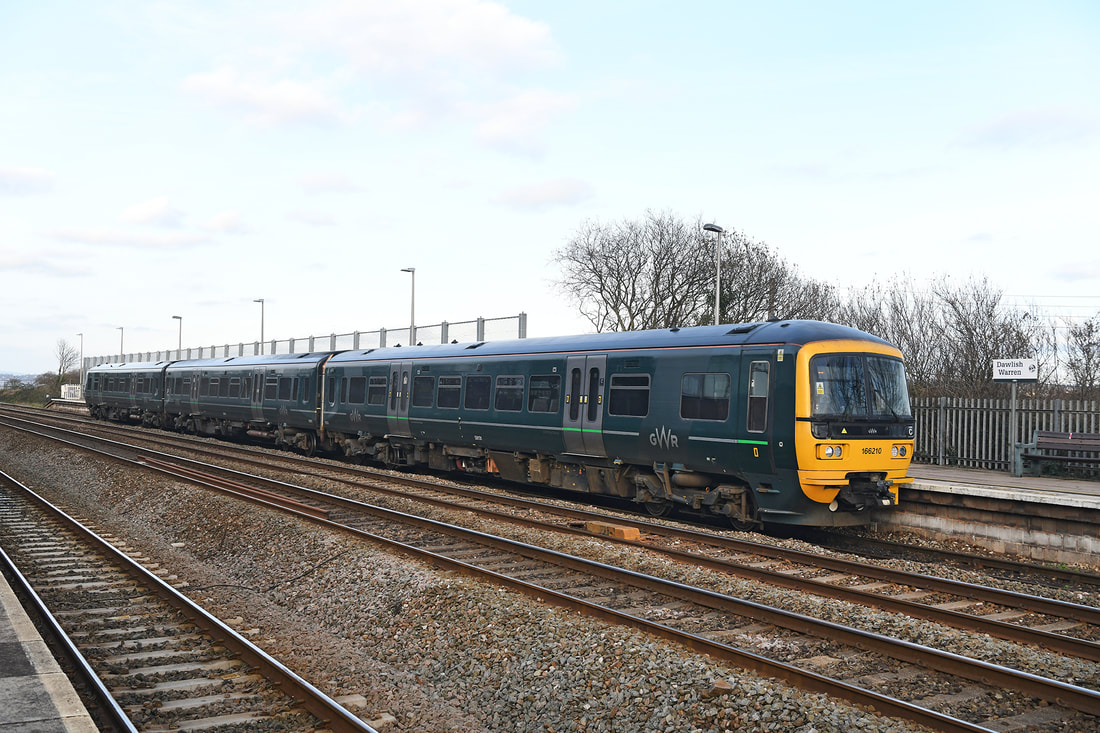 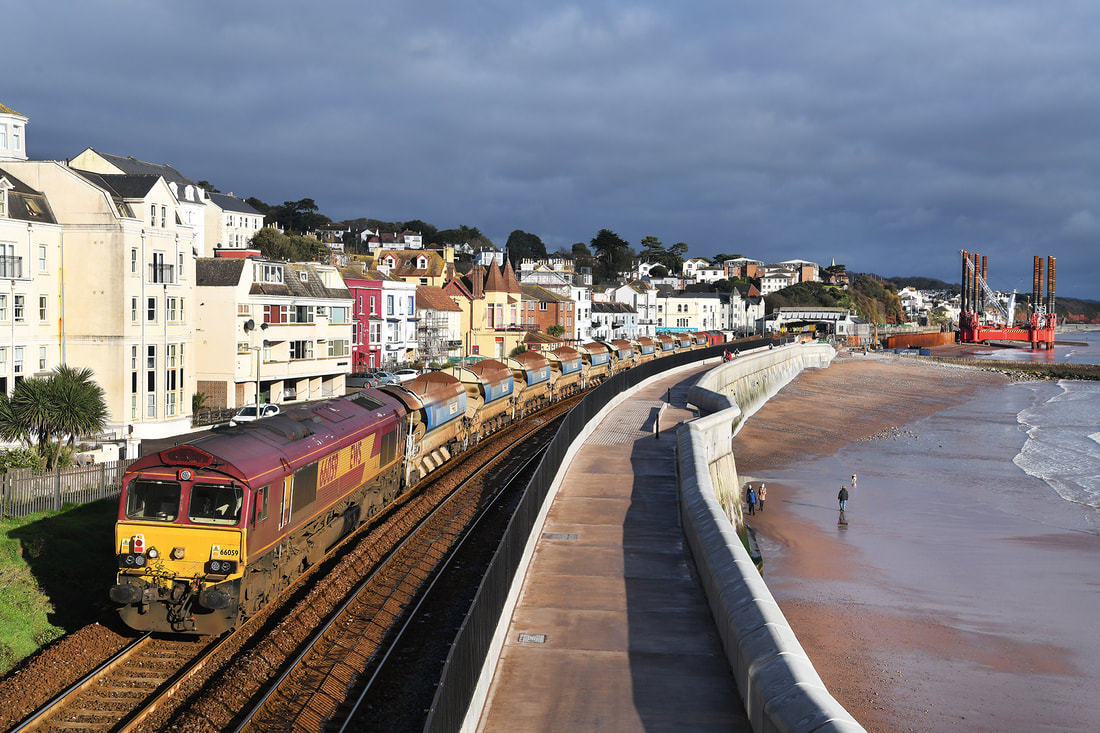 I try to time my half hour walk every day with some form of train to photograph on the close section of the sea wall. Today, 14 January 2021, perfect low winter sun, a non passenger train and time for a walk fell together well, to capture 6W60 the 07.25 St Erth to Westbury empty auto-ballaster set, 'top and tailed' by Nos. 66109 and 66059. The light was some of the best I've seen in weeks. No. 66059 is a slightly interesting '66' as its fitted with an extra nose end light and coupling modifications for banking trains up the Lickey incline. 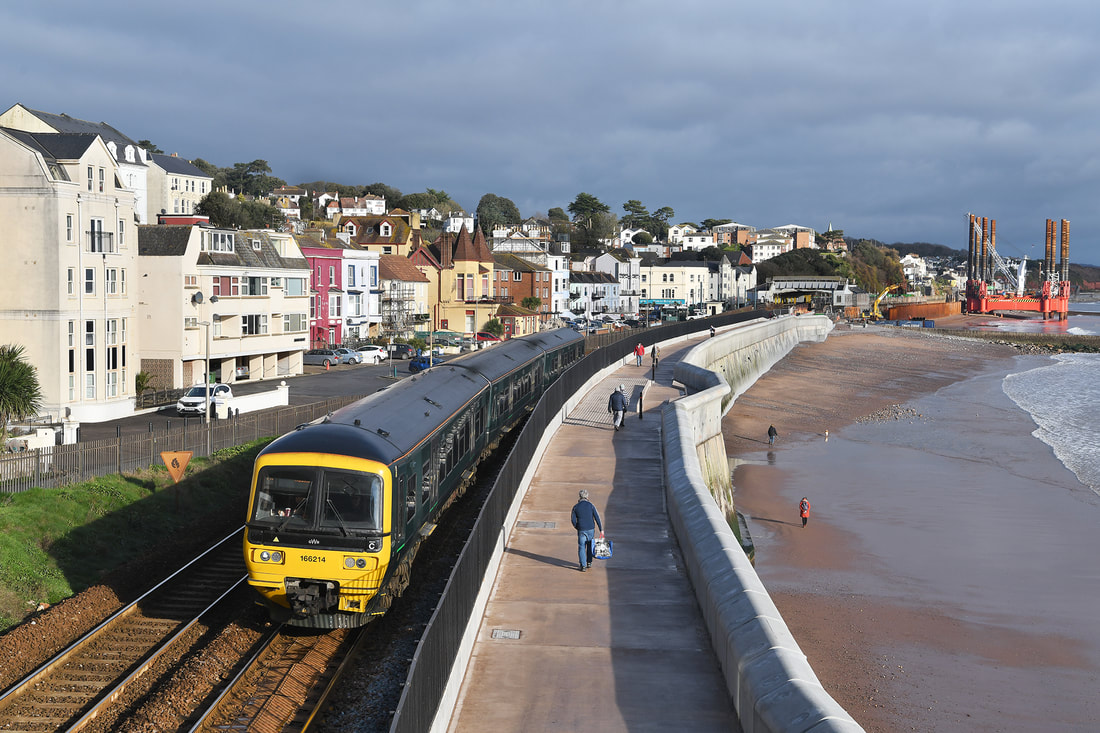 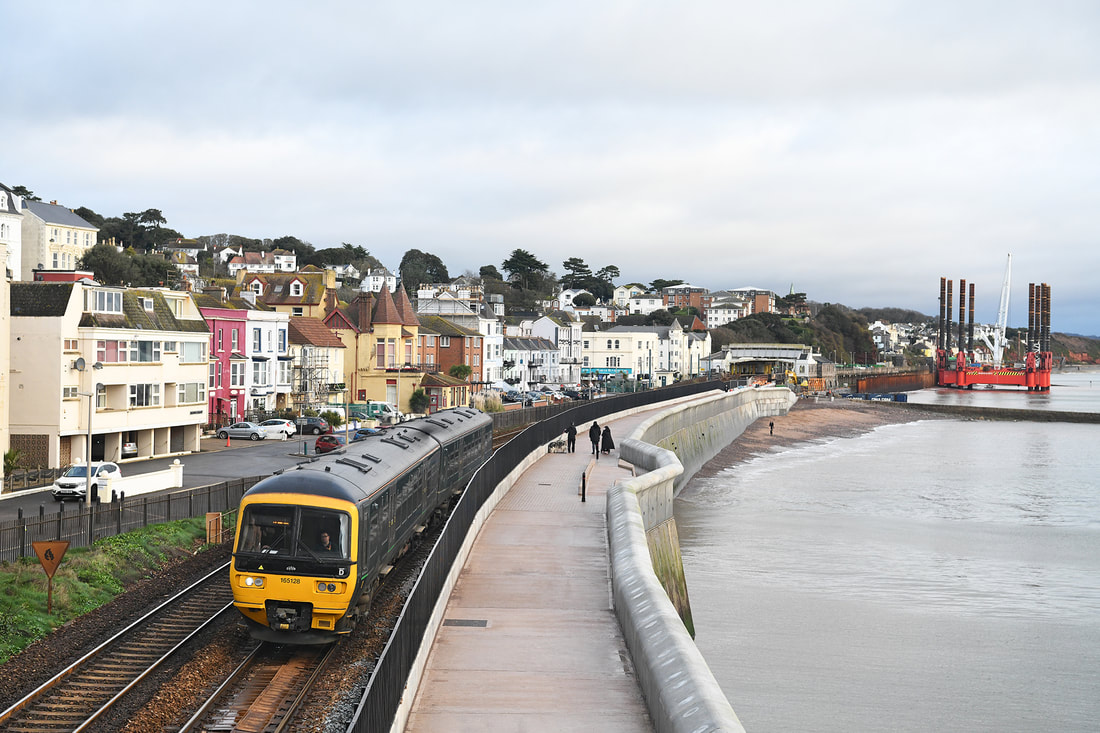 Another little bit of Dawlish Sea Wall history made today, 13 January 2021, when the first Class 165/1 two-car 'Turbo' traversed the wall, when set No. 165128 operated the training runs. It is seen running adjacent to King's Walk as train 5Z51, 08.28 Exeter depot to Goodrington carriage sidings. In the past we have had a two car Class 165/0 involved in tests way back when they were introduced, 165/1 three cars on gauging and 166s in passenger service, but before today, never a two-car Class 165/1. 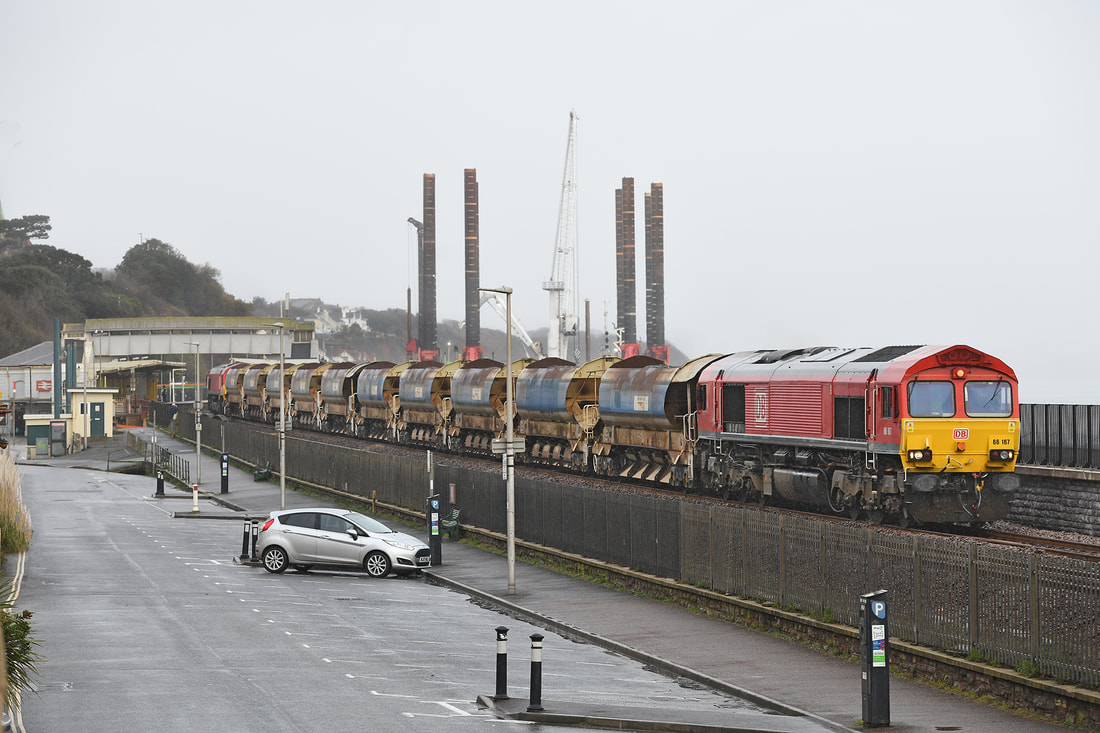 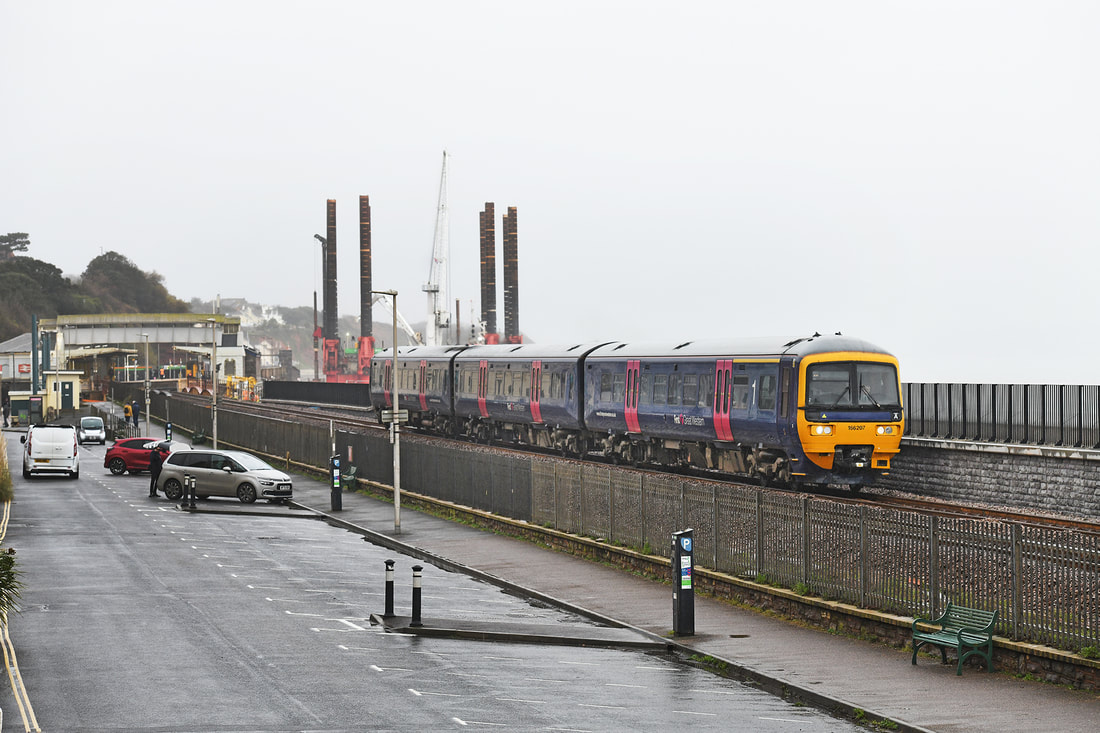 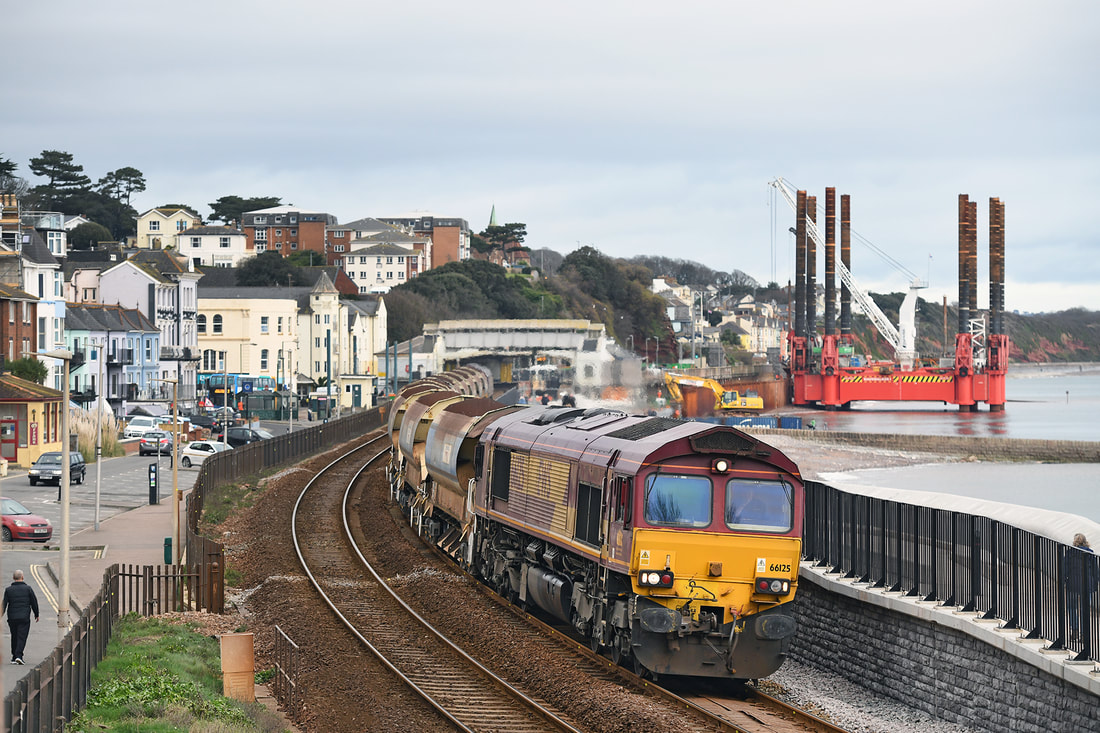 On 11 January 2021, DB Class 66s Nos. 66125 and 66059 'top and tail' 10 auto-ballasted wagons through Dawlish as train 6W50, the 11.59 Westbury to St Erth, but was terminated/recessed at Newton Abbot Hackney Yard after hitting the axle detector at Exminster. Good to see 66159 still carries its as built EWS branding and animal head logos.